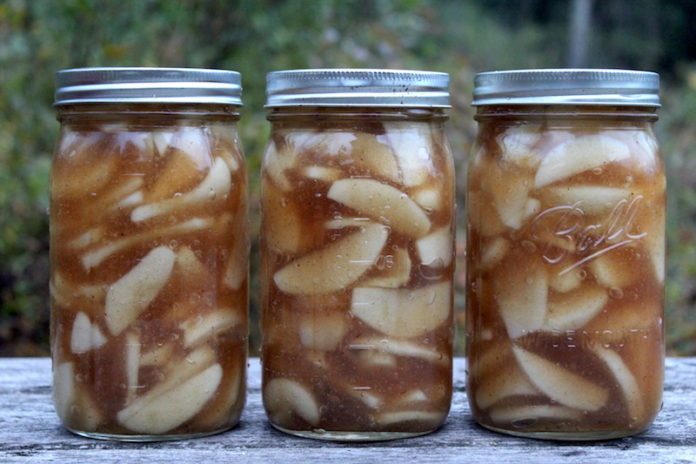 Canning apple pie filling at home means you’re just minutes away from having a pie in the oven.  The apples are already peeled, chopped, seasoned and thickened.  That allows you to just pour the pre-made apple pie filling into your favorite crust and bake.  Next time you need something quick for a potluck, you can still bring a homemade apple pie.

It’s a beautiful fall day in Vermont and I spent the day at a pick your own orchard with my kids gathering the apples for canning apple pie filling.  We normally have plenty of homegrown apples, but our trees took the year off this year which offered the perfect excuse to take in the scenery at one of Vermont’s loveliest fall attractions.  As we’re checking out, I glance over to see that I’m not the only one that had the same idea.  The orchard was selling their own canned apple pie filling.

I know canning apple pie filling takes a lot of work, but $13 a jar seemed like quite a bit for one pie.  Thinking on it though, a grocery store or farmer’s market apple pie costs about $20 to buy.  In the end, canning my own did save quite a bit of money, assuming my labor is free.  Each quart jar took about 3 pounds of apples (at $1 per pound) plus a tiny bit of sugar and spices, and I got paid for my labor canning in the savings.  Good thing I love canning, so I get paid to do what I love!

While many people bemoan canning as “a lot of work” really it just prepares food to make homecooked meals simpler later on.  Instead of peeling apples for a pie that needed to be in the oven an hour ago, you’ve already done the work and canned up all that effort for home cooked delicious when you need it.

Personally, I think it’s easier to peel a bushel of apples all at once when I have the time than to try clearing counter space on a busy weeknight.  I get in a groove that way, and it’s just one mess to clean up.  Still, it only took me about 20 to 30 minutes to peel, core and slice the 12 cups of apples I needed for this canner batch of apple pie filling.

After peeling and chopping, the next step is blanching the apples.  It seems a bit strange to pre-cook apples that are going to be canned and then baked into a pie, but bear with me here.  It’s a quick one minute blanch that mostly serves to pre-heat the apples and drive off the air within the fruit.

When you raw pack for canning, the fruit always floats because it contains a surprising amount of air in its tissues.  Toss the sliced apples into boiling water and you’ll see just what I mean.  The water will stop boiling when the cool apples go in, but the apples themselves will bubble.  All that air would have been taking up space in your canning jars, but now you’ll have extra apple flavor instead.

Air bubbling out of apples during blanching for home canned apple pie filling.

Once the apple slices are blanched, they’ll have lost a substantial portion of their total volume.  Starting with 12 cups of sliced apples blanched in two batches of 6 cups each, I would guess that I ended up with roughly 9 cups of blanched apple slices.  They were only about 2/3 the way up the sides of a bowl they’d previously filled, though they retained their shape and color beautifully.

After they’re removed from the boiling water, the apple slices need to stay warm.  I placed them into a thick-sided bowl and covered it with a kitchen plate while making the rest of the filling.

Apple slices after blanching. They need to stay warm at this point while the apple pie filling gel is made on the stove.

The apple slices can’t go into the canning jars alone, but canning them in water or syrup would needlessly draw out their flavor.  They’re canned in a pre-thickened gel made with sugar, spices and clear jel.  While you can use flour to thicken regular pie filling, it won’t do for canned pie filling.  Clear gel is a special type of cornstarch that flows while it’s hot, but sets up nicely once it’s cooled.

Clear gel can be heated and cooled multiple times, meaning that it can be put up in canning jars and then baked into a beautiful homemade apple pie later.  There are two types of clear gel, so be sure you get the cooking type clear gel for canning apple pie filling.

The filling liquid consists of clear jel, sugar, spices, apple juice, lemon juice and water.  All of those ingredients (except the lemon juice) are added into a pot and simmered until it begins to thicken.  Then the lemon juice is added, and the mixture is returned to a boil for 1 more minute.  After that, the hot blanched apples are mixed back into the pie filling liquid.  Working quickly, pack the apple pie filling into canning jars (pints or quarts) leaving 1 inch of headspace.  It’s important to remove air bubbles at this step before applying two-part canning lids.

Be sure to leave a full one inch of headspace when canning apple pie filling to prevent jar overflow in the canner.

Once the jars are filled and lids attached, the apple pie filling is canned in a water bath canner for 25 minutes.  At that point, turn off the stove and allow the jars to sit for an additional 5 minutes.  This extra 5 minutes is really important!  I know, it seems silly, but if the jars are still boiling hot when they’re removed, the apple pie filling is at a high risk of siphoning.

What is siphoning?  It’s a loss of liquid in canning, and in this case, it’s a loss of hot gelled pie filling liquid.  The rapid temperature change when the hot jars hit the air can cause hot pie filling to erupt out of the top and it makes a huge hot sticky mess.  The jars will likely still seal, and if they do they’re still fine to store at room temperature.  Just wait for them to cool completely, check the seals and clean off any sticky pie filling on the outside.

I’ve never had anything else siphon on me during canning, except apple pie filling.  Even other canned pie fillings, like my homemade peach pie filling, never have issues.  Look up articles about siphoning during canning and they almost always mention apple pie filling.  It’s notorious for this problem.  To prevent it, really work to remove the air bubbles within the jar, and make sure you leave an ample 1-inch headspace.  Then, once the canning time is up, allow the jars to sit for at least 5 minutes (maybe 10 to be safe) before removing them from the water bath canner.

A jar of home-canned apple pie filling that siphoned or leaked upon removal from the canner. The jar still sealed, so it’s safe to clean it off and store it at room temperature. It’s messy, but it didn’t ruin this jar.

If you’re extra careful, siphoning doesn’t have to be a problem when canning apple pie filling. Once your jars are cooled to room temperature and you’ve checked seals, they’re ready for storage at room temperature.  It takes roughly one quart plus one pint of canned apple pie filling to fill a standard-sized apple pie or two full quarts for a heaping or deep-dish pie. For small batches, you can put up pint jars as well, and they work wonderfully for apple turnovers or as a pancake topping. I like to use it as part of my apple pie shortbread bars.

A note on choosing apples for pie filling…the apple needs to be a firm apple that doesn’t break down during cooking. Any apple that’s “good for applesauce” is not as good as a pie apple.  My favorite apple for pies is Honeycrisp, and that’s what I’m using here. They have plenty of acids, which balances the sweetness and they hold together really well during cooking.  For more ideas, check out this list of the best apples for apple pie.

This recipe for home-canned apple pie filling comes from The Ball Complete Book of Home Preserving, which is my go-to resource for safe canning recipes. I reduced the cinnamon from 1 1/2 teaspoons per batch to 1/2 a teaspoon because I like a less cinnamon heavy pie, but feel free to use the full amount if you’re a big fan of cinnamon. This simple recipe for home-canned apple pie filling lets you put up everything you need to fill a pie in a hurry. Apple pie filling is also great on pancakes, over cheesecake or in cookie bars.

Recipe yields 7 pints (or 3 quarts and one pint).

How to Make Trench Cake – Recipe Inside

How to Make Kentucky-Style Fried Rabbit

How to Make Fruit Leather and Add It To Your Stockpiles

How To Cultivate Your Own Wild Yeast Starter