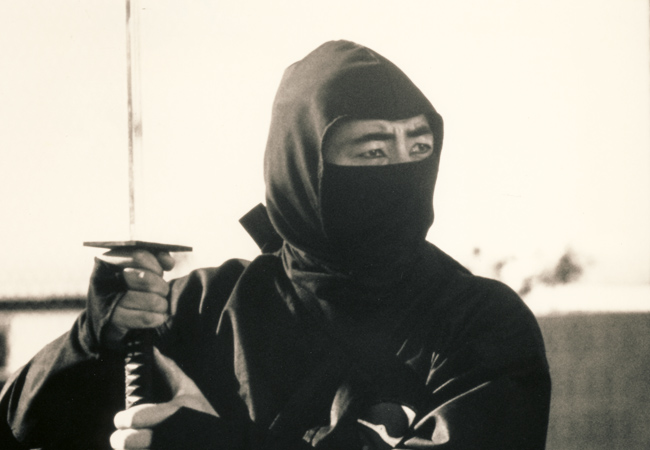 History is packed with unique characteristics and diverse groups of people from which we can learn things. That of these communities has needed to find a way to overcome life’s challenges, sometimes facing tremendous obstacles along the way. Others were great obstacles to their neighbors, either by fighting wars with them or by stealing resources. 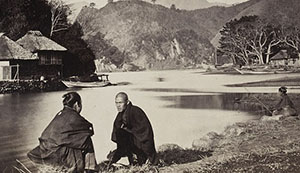 The Japanese Ninja is one of the most unique classes in history. Those were probably the first “snake eaters” in the world, but I doubt that their diet included snake. Alternatively, I use this term in reference to all types of commando units, as it is used in the military.

Today’s many special operators all trace their origins back to the British SAS (Special Air Service), a British Army clandestine special forces or commando unit founded at the beginning of World War II. Like the SAS, the ninja had to create their own tactics, equipment and even weapons, because there was nothing to copy them from. Looking at it from this side of history, we can see that they excelled in the military art that is most essential.

Ninjas may have been great underground warriors but they were great inventors as well. Pretty much everything they used was exclusive to their group. While they were experts in using the Samurai’s Katana sword and the bow, they were also experts in a wide variety of other weapons that the Samurai did not use.

Their history of invention didn’t end there. Ninjas have been involved in other fields, for example herbal medicine. Their research in this region led them to develop their own food for survival which they would use while they were on their missions. Which include foods such as hyourougan, kikatsugan, suikatsugan, etc. Of the three, suikatsugan supposedly had some impressive properties, such as allowing the ninja the ability to go without water.

Suikatsugan allegedly restricted the ninja’s thirst, allowing them to go without water for as much as 45 days, if they ate just three of these little superfoods. This is probably an exaggeration, because we can usually go without water for a maximum of three days. Also with their highly disciplined lifestyle, and the rigors that they usually bring into their bodies, going 45 days will be too much of a stretch. Ifukatsugan does, however, cause one to salivate, giving the impression that one would go without water.

Although this superfood does not necessarily do what the ancient writings postulate, we can be sure that it was a lightweight, balanced source of nutrition. When on a mission, ninja had to save every ounce of weight they could. Their day-to-day life was intense, so as to prepare their bodies for the rigors of the tasks they performed. Foods like this were not consumed carelessly, but instead, developed with care over a considerable period of time.

Aroused by my curiosity, I went about to make my own ninja superfood. The first challenge was to find the ingredients, because these aren’t items I normally buy in my local store. 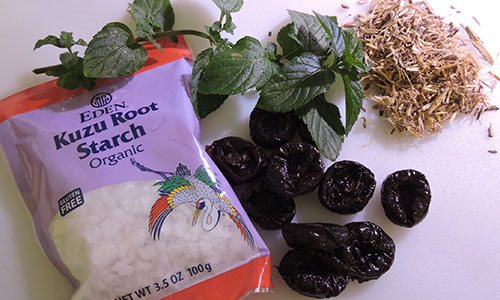 All the ingredients needed to be ground and mixed together, forming something roughly the cookie batter consistency, albeit a lumpy cookie batter. I decided to grind the ingredients with a Mexican mortar and pestle, called a “molcajete,” in order to preserve some of the roots of this cuisine. These are generally made of porous volcanic rock but I have one made of granite. While it would not be polished like a Japanese one, it is a reasonable approximation.

You could possibly do the same with a blender or food processor; but in doing so you would lose the feeling of “originality.” You would save a considerable amount of time, in return, which would make the process more enjoyable.

Licorice root is beneficial for a number of stomach problems including ulcers, heartburn and persistent stomach lining inflammation. I had to buy mine online, because I couldn’t find it locally. It came in a jar, shredded. While the root, when eaten alone, naturally doesn’t taste much like licorice, it added a distinct liquorice flavor to the mix. 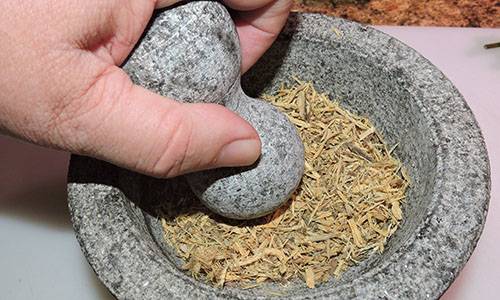 Grinding the already shredded licorice root with the mortar and pestle was difficult; perhaps even more so because the root of the licorice had already been shredded. I suppose it would have been left in shredded form, but that would have been hard to chew and even digest. I may get it much smaller but it took a lot of time to do that. 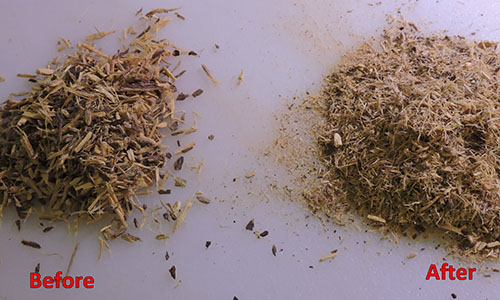 Kudzu or kuzu starch is a popular ingredient in Japanese recipes, which are primarily used to thicken sauces. It provides a vivid, translucent consistency, with no starchy flavor added. Being a starch, however, it is a good source of carbohydrates which quickly transforms the body into sugar for energy. Kuzu starch is an anti-inflammatory agent which can also be used to treat stomach disorders. 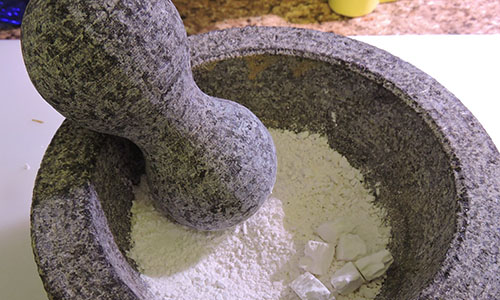 I ended up buying this ingredient online. The starch comes in chunks, like the ones seen in the mortar above on the right. Those are easily ground to powder making them the easiest ingredient to work with in the recipe. Once mixed with the other ingredients, this one dissolves, and is likely to work as a binder to hold all together.

Dried plums are a perfect food source, bearing a wide range of vitamins and minerals, as well as fiber and antioxidants. If you have difficulty locating these at your local grocery store, look for prunes, as for some reason, dried plums are commonly known by this name. Prunes are popular so they are the easiest ingredient to come up with. This ingredient usually provided much of the suikatsugan’s nutritional value including a decent amount of calories.

Dice them with a knife, before grinding the dried plums. This will cut up the skin, helping ensure that when you grind them, they don’t stick together in large lumps. I ended up adding more after my first grind and got a little lazy dicing and grinding them. It made my mix lumpy, causing me to go back and mash it again.

Since the finished suikatsugan is meant to be rolled in small balls, we want to mash this in the mortar and pestle as well. While it would theoretically be possible to use it diced, you would need to roll the finished product into larger balls. 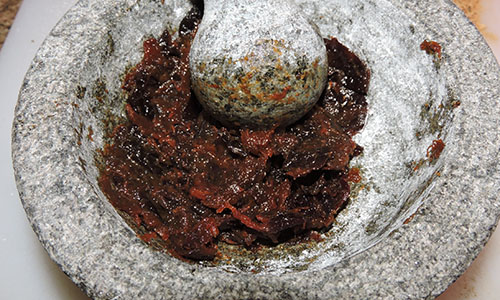 All but difficult to find Japanese mint here in the United States. Only buying the plants online is about the only thing you can do; but even then, it’s hard to find. Luckily, the Japanese mint is almost similar to Spearmint, and is fairly straightforward to find, according to an old botanist I came across. I was able to buy spearmint in the garden section of my local home improvement center.

This is the mint that provides much of the suikatsugan’s health benefits, as well as being the ingredient that helped the ninja cope with thirst. Japanese mint is used to treat stomach disorders, nausea, pain, spasms, headaches, toothaches, cramps, earache and a host of more extreme medical conditions. This is a good replacement for the other based on the details I have been able to find online, as well as what I might find for spearmint. 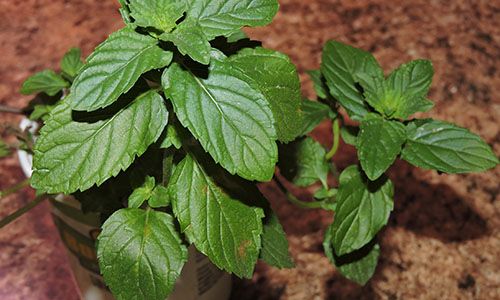 It is all but difficult to grind the spearmint leaves in the mortar and pestle unless you are trying to make a lot of suikatsugan at one time. Instead, you can chop it fine on a cutting board, just as you would do preparing other herbs for cooking.

Once the ingredients have been prepared, making the suikatsugan merely requires mixing them up. I tried to mix them with a spoon first, that was a joke. The plum paste stuck to the spoon, and it stuck to everything else. Nothing mixed up. I ended up mixing it with my fingers, probably the way it was done originally. Not only is this a very efficient way to mix everything together, but to make the balls anyway, you have to get your fingers in there. 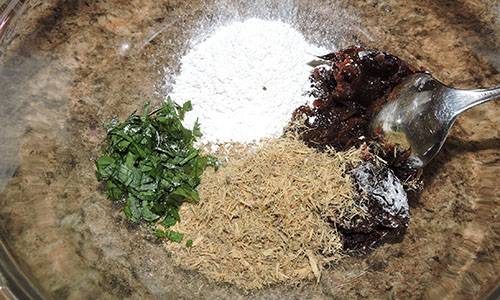 To help the dry ingredients (licorice root and kudzu starch) mix in, a small amount of water might need to be added. Do not use too much water, because it will make the mixture too soggy and difficult to work with. I used a thimbleful one and it was almost too much.

The finished mixture should be rolled into balls about 1 cm in diameter and put out to air dry. 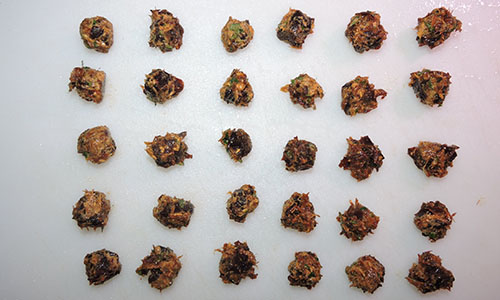 After all this effort, making the suikatsugan, I couldn’t just drop it with making the balls and picturing them. I knew that you were curious about their taste and honestly I was curious about it myself. And I put it to the test. I was ready for a bad taste … but for the sake of science, and all that …

It was surprisingly fine. I could easily detect the different mint and licorice root flavors, as well as the dried plum that formed the foundation. They really went well together though an odd mix of flavors. I was happily taken aback.

Even so, I’m sorry, I’m not going to try going without water for 45 days, not even after eating three of them, which was supposed to be enough to keep a ninja out of water need. I can see how they can give the impression that they do not need water, because the powerful aromas of mint and licorice make one salivate. So if you were in a place where you didn’t have enough water, I can see where suikatsugan eating would ease your thirst, at least for a short time. Yet once the feeling goes away you’ll always need water.

Second, suikatsugan should be a healthy food for survival. This not only provides a good punch of energy; it also has a great mix of nutrients. The therapeutic properties of the various ingredients will certainly help the body cope with food shortages or a lack of a healthy diet. And I can certainly see that it would be useful to pack along as something, either in your bug out bag or as part of your survival arsenal.

Maybe trained ninja would go longer without water than you or I do; I wouldn’t doubt that. But instead, after successful completion of it, they expected either to die completing their mission or commit suicide. And I doubt the full 45 days were ever properly tested; they were probably gone before they reached that point.

Where To Start When Cleaning Up Your Garden

Wal-Mart Fact That Will Shock You 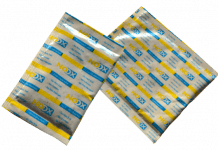 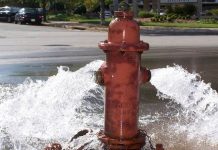 10 Places to Find Water in the City Post-SHTF 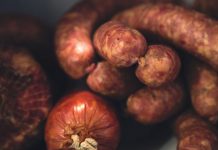 How To Make Sausage and Smoke it Too 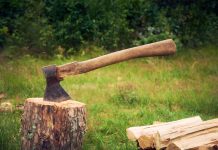