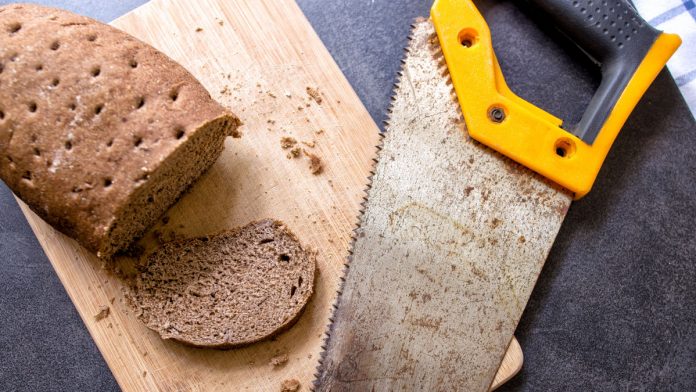 If your great-grandmother saw half the things you just throw away, I’m sure she’d have some stern words for you. These days, food comes pre-packaged, prepared, trimmed, peeled and neat.

While boneless chicken may be convenient for some, practically speaking, it’s robbed you of some of the most nutritious parts of the bird. (And charged you more for the privilege.)

Still, what do you do with all the extras? How do you turn the parts of food that people normally throw away into nutritious meals?

Someday, we may not be living in such a land of plenty. Practicing using up every last bit today, could save your life tomorrow.

I can’t help but laugh when I see frugal foods that our grandparents knew, coming back into style like this generation invented them. Bone broth is my favorite example.

It’s the ultimate cheap food, and a great way to get the last little bit of nutrition out of an animal. These days, it’s marketed as an “artisanal food” and marked up to as much as a dollar an ounce. 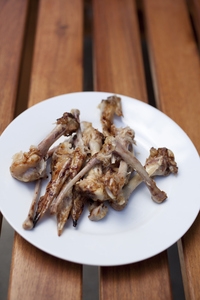 What is it really? Bones. The same bones you scraped off your plate and trashed at the end of your meal.

Bone broth is extremely easy to make at home, and completely free if you do it right. Simply save the bones from your meats throughout the year in freezer bags until you have enough for a slow-simmered batch of nutritious bone broth.  You’d be surprised at how many bones the average family throws away in a year.  If you plan ahead, bone broth can be canned for long-term preservation.  Each year, my family cans around 200 quarts, all made from the leavings off our plates.

If we bought the “artisanal” version, that stockpile would cost us nearly $3,000. Can you believe it? All made from bones we would otherwise throw away.

Even after you’ve made bone broth, you’re still not done getting every last bit of nutrition out of bones. It’s easy enough to process bones into homemade bone meal to nurture your garden. Straight bone meal is high in phosphorus, a nutrient that’s hard to come by from other sources, including compost.

It can sell for as much as $10 per pound in high-end garden stores, or you can make it yourself for free.

Related: How To Can Chicken (Step By Step Guide With Pictures)

You’d be hard-pressed to find someone that knows how to make good use of organ meats these days. While beef sells for high prices, the most nutritious parts such as the liver, heart, and kidneys sell for as little as $1 per pound. Some butchers will even just give them away because they can’t find customers who want them. 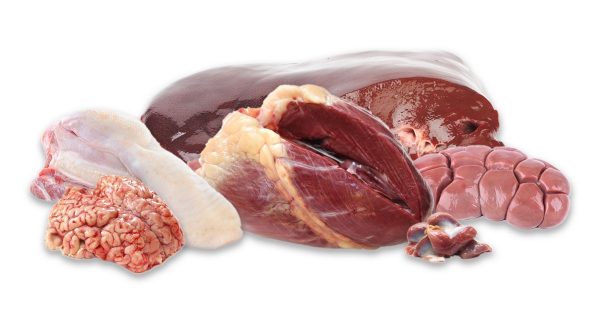 Meanwhile, high-end restaurants are serving Pâté to wealthy customers who don’t know a cheap thing when they see it. It’s delicious, but that doesn’t mean it needs to be expensive.

If you’re squeamish about the texture, you can extract the nutrition from organ meats into organ meat stock to use in your everyday cooking. Organ meat stock adds an extra layer of richness to food that’s hard to match any other way, and it can be canned for long-term preservation in the same way as bone broth. 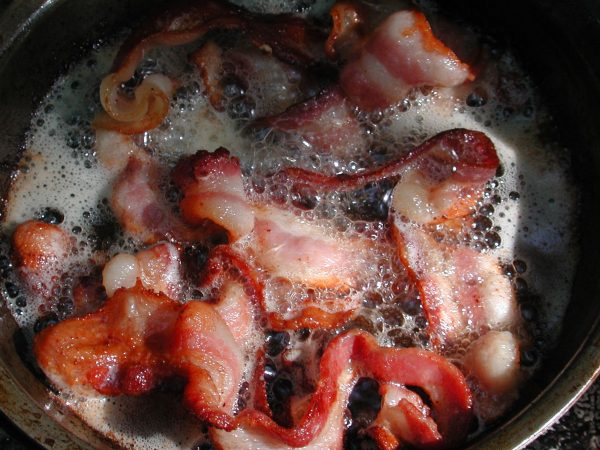 Chances are, your great-grandmother kept an old can or jar next to collect all the extra bacon grease after breakfast. That same grease was scooped out to make the perfect home fries, cut into biscuit dough, or was added to a hot cast iron pan for a truly authentic southern cornbread.

The best part about bacon grease, besides the fact that it tastes like bacon, is that it keeps almost forever. That can of bacon drippings just sat there on the stove, ready to use, no refrigeration needed.

Even in times of hunger, there was stale bread. Historically, bread was baked in batches to conserve fuel and oven time. By the end of the week, there likely wasn’t any fresh bread left. That doesn’t mean the stale bread was thrown out. Every bread-eating culture has traditional recipes for dealing with stale bread and turning it into something extraordinary. 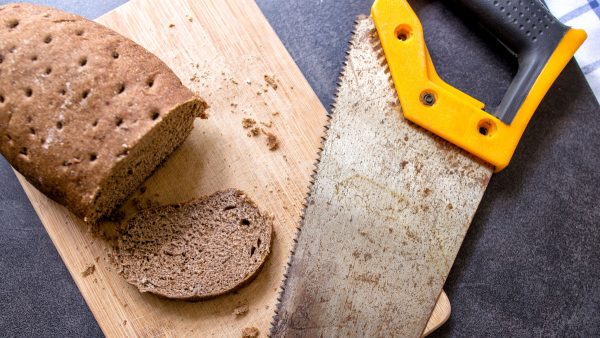 What we call “French toast” the French call “pain perdu” or forgotten bread. Though you’ll find it on the brunch menu at fancy restaurants, it’s just a cheap way to use up stale bread.

Croutons are nothing more than stale bread that has been toasted and cut into cubes.

Breadcrumbs were a traditional way to work stale bread into meals, bulking up sausages and meatloaves at the same time. While today, you can buy prepackaged breadcrumbs, they’re often not much cheaper than the meat they’re replacing.

These days, you can buy a fancy tub of rendered duck fat for close to the price of a whole chicken. Yet, at the same time, chicken fat is trimmed and thrown away. Chicken fat from healthy, free-ranging, bug-eating backyard chickens is just as tasty as high-priced duck fat and was a traditional staple in home kitchens. If you’ve ever processed your own backyard chickens, you know that chicken fat is soft and yellow, full of natural vitamin A and omega fatty acids.

Exactly like high-priced duck fat, but often overlooked. Ask the butcher at your local grocery store to save you off a tub of chicken fat to render at home. Odds are, he’ll let you have it for free and will be glad to be rid of it.

We all know that milk doesn’t really go bad on its expiration date. It’s good for at least another week, but even still, when it does “sour” it’s still perfectly good for cooking. Some recipes even call for soured milk and have you substitute fresh milk with a little vinegar added to sour it. Sour milk creates a wonderful texture and complex flavors in home-baked bread, and it adds extra lift to pancakes.

At some point, most people have had a gallon of milk go just a bit sour. While a bit sour is good for baking, truly spoiled milk can taste horrible. Once milk starts to get a bit sour, either use it immediately in baking or take the jug and put it in the freezer. 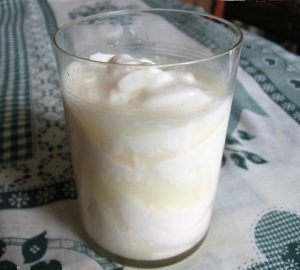 Frozen milk isn’t the best for straight drinking, but this isn’t drinking milk, it’s already soured milk that you’re saving for baking. Any texture changes in the freezer are irrelevant.

Our local grocery store has a bin in the back of their walk-in refrigerator where they keep expired milk for employees to take home. About once a month, I ask if I can have some to take home. It all expired the day before, which means they can’t sell it, but it’s got plenty of good shelf life left. Sometimes I can get 8 or 10 gallons. I keep one for fresh use and make cheese out of the rest.

I now have several pounds of cheese that I can wax and store in my basement for long-term preservation, at no cost to me. If I don’t get to the milk in time to make cheese, it’s still fine to pop it into the freezer and save for baking later on.

Related: What Happens If You Put Silver In Milk?

Just about every type of fruit or vegetable peel is good for something.

Apple peels and cores can be cooked down into tasty apple jelly, no pectin or added sugar required. Literally just take the peels and cores, normally thrown away, and add them to a pot with some water instead. Simmer for a few hours, and then strain and cook the liquid a bit further until it jells. It can be canned for long-term preservation.

Citrus peels can be candied to add to bread or marmalade, or zested and used for flavoring. Limoncello, an expensive Italian liquor, is nothing more than lemon zest soaked in vodka with a bit of sugar added. 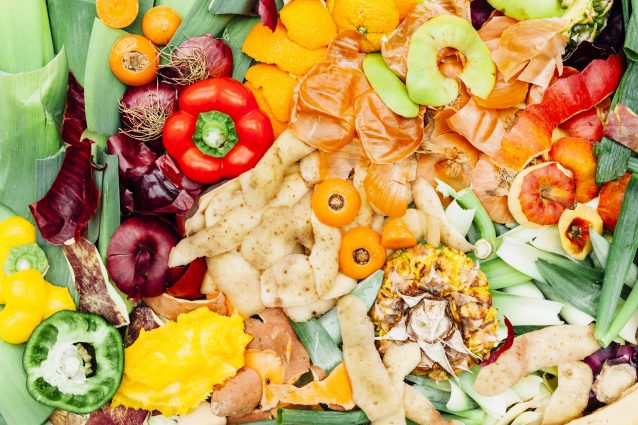 Since you’d normally throw away the peel, zest your lemons (or another citrus) into a jar of vodka before you use them. You can add them in one at a time as you use your citrus, and it’ll develop more flavor with each zest added. It takes the zest of about 5 lemons, plus about 1/4 cup of sugar, to make a pint of limoncello.

Just about any type of fruit peel can be made into vinegar by adding a bit of water and allowing it to ferment. It’s traditionally done with apple peels to make inexpensive apple cider vinegar. However, any peel from a sugary fruit, like a pear, mango or pineapple can be submerged in water and fermented into homemade vinegar.

Related: Things to Recycle in your Compost Bin

Potato peels can be cooked in a little water to make “potato water” which when substituted for regular water in baked goods gives them a soft and pleasing texture. Rich “potato bread” that you buy in the store actually isn’t made with whole potatoes, just potato water in place of tap water.

Most vegetable peels can be saved in the freezer and added to stocks and bone broths. This is especially true of onion peels, which are rich in vitamin C, and add great flavor and color to stocks.

20 Prepper Lessons from an Infantryman

What Batteries to Use for Solar Storage

How to De-Gas Beans

How to Make Portable Soup