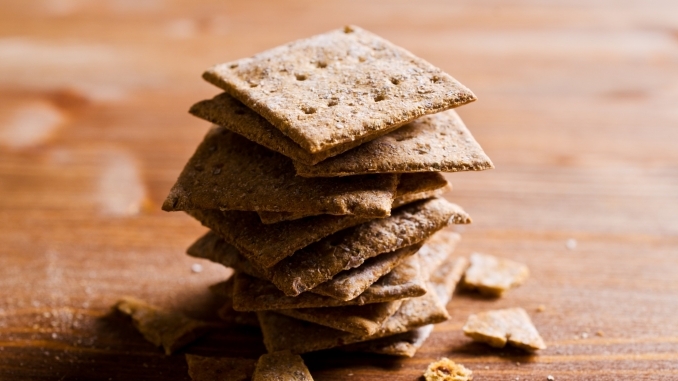 Why store flour (max shelf-life 1 year) when it can be made into Hardtack Biscuits that will last forever.

For centuries, hardtacks were the key food source for sailors (throughout the Tudor era and later periods).

But the Civil War is what most people know it from, and it was that war that proved this hardy biscuit’s incredible longevity. Many of the initial supplies provided to Union and Confederate troops were leftovers from the Mexican-American War, and so much rough tackling was made during the Civil War that it would not be consumed completely until the Spanish American War – 50 years later.

Preheat the oven to 350 degrees. Add the flour and salt into a mixing bowl, and then pour the water. Mix all ingredients together. Use extra flour if necessary to make sure the dough is no longer sticky. However, be careful not to make the dough too dry. If you add too much flour, add slightly more water. Knead the dough until it is easy to work with.

Use the rolling pin to roll the dough into a rectangular shape. Hardtack was around a half inch thick, so don’t worry about making the dough thin.

Bake the dough for 30 minutes.

Take the dough out of the oven and cut it into large squares (around 3 inches by 3 inches). Then poke four rows of four holes in the cracker using a stick (or a fork).

Flip the squares and return to the oven for 30 more minutes (even an hour just to make sure it gets completely dehydrated). Allow the hardtack to completely cool inside the oven.

Be careful when biting into a cracker, as they do get very hard when completely cool.

Soldiers often softened the crackers by crumbling them into coffee, or frying them with animal fat. Sometimes, hardtack was all a soldier had to eat for many days.

Just the fact that your great-great-grandson (whom you will never meet) – may taste your hard tack biscuits – makes you think.

The best way to store flour is to turn it into Hardtacks. Later on you can turn it back into flour whenever you want.

Food crisis may last up to 4-5 years and don’t think it can’t happen in the US. If the grocery shelves are empty, you are only nine meals away from anarchy.

Disinfect Huge Amounts Of Water With This Common Household Item

What to Bring on a Day Trip

How To Make a Powerful Calendula Extract to Keep in Your...