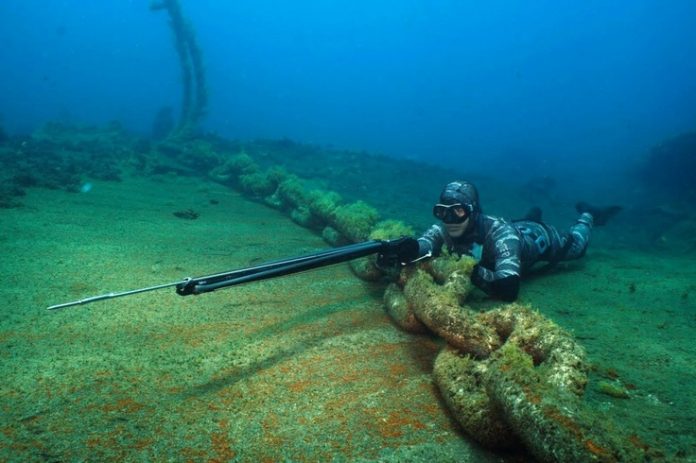 If you’ve never thought about spearfishing, you’re in for a treat.

Because not only is it one of the most active forms of hunting on the planet, once you’ve honed your skills it’s an almost guarantee that you’ll be bringing home fresh fish.

I grew up by the beach, and it wasn’t long before I wanted to catch bigger and better fish. Learning to spearfish gave me the opportunity to do precisely that. Geared up I slide into the water like a rubberized seal, and in an hour or two return home with more than enough fresh seafood to feed my family for the next few days.

In a crisis, you need every available option to put food on your table. To keep your family happy, their spirits up, and most importantly, ensuring they get the sustenance they need to survive whatever the world has decided to throw at you.

You can’t rely on the supermarket. Or the butcher. Or even your own stores. You need to be able to bring in fresh food consistently, otherwise, your own shelves will run dry.

And that’s what spearfishing is.

A fishing technique that puts you in the same water as the fish. But that’s not the best part. If you’re line fishing, you’re at a disadvantage. You can’t see what’s happening underwater. You don’t even know if you’re casting in the right spot, or if there’s any fish around. Oh, and it also relies on the fish being hungry. Spearfishing puts you back in charge, allowing you to target and hunt the perfect fish. So, your family’s fed. And everyone is happy.

What gear do I need for spearfishing?

Think of spearfishing like snorkeling with an underwater rifle. You’ll need a speargun, of course, mask and snorkel and a pair of fins. That’s the basics. A wetsuit will keep you warm, and additional gear like gloves, a weight belt, and a dive knife are also recommended. When it comes to choosing the right gear things can get confusing, with all the different brands, but I’ve put together a couple of guides that can help, like my recommendation for the best speargun. Just remember, you don’t need to spend a fortune. I started with less than $100 worth of gear. But better equipment does make things easier.

Where do I even go spearfishing?

If you’re new to the sport, you’re probably best learning to spearfish from the shore. Having a boat can help you reach locations you’d usually not get to, but it’s also not required. In my younger days I hardly ever had the chance to use a boat, and I still caught plenty of fish. Look for an area that’s a bit protected from the swell and the wind, and swim out and have a look around. Most people are surprised at just how many fish there are, even in close to a jetty or a rock wall, because they haven’t been on the bite. Just because they’re not feeding on all the bait from the line fisherman, it doesn’t mean they aren’t there.

What kind of fish can I catch?

The fish you can catch will depend on a few things. The part of the country you’re spearfishing in, the depth of the water you’re diving, and often the time of year will also have an effect. Generally, you can expect to find small to mid-sized reef fish in 2 to 15 feet of water, with larger species out in deeper water. Just make sure you’ve read up on any local fishing regulations, sizes, bag limits, and protected species before getting in the water. The last thing you want is fine because you shot the wrong (or an undersized) fish.

How do I shoot a fish?

It can be a little tricky at first to get the hang of spearfishing, but once you’re comfortable in the water, it gets much more natural. Primarily what you’re wanting to do is duck-dive underwater, and find a spot on the bottom to sit and wait. Turn the safety off your speargun, and sit still until an interested fish comes close. You’re aiming at the point on their body where their spine connects to the head, and when the fish is in range (anywhere from 2 to 6 feet), extend your arm, line it up and take your shot. If you’re lucky, you’ll “stone” your fish, which means you’ve killed it on impact (or knocked it out). If not, pull the spear towards you and the fish too, grab it by the gills and use your knife to dispatch it humanely. You don’t want to be in the water with a dying fish, it can attract sharks. A dead fish is much safer.

Wait, what about sharks? 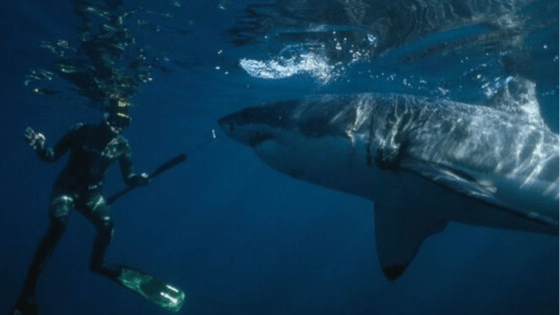 I’m not going to lie. There are sharks in the ocean, and every now and then I’ll have an encounter with one. But don’t fret. They’re usually much more interested in the fish you’ve caught than you, and if a shark’s being particularly aggressive, I just hand over my fish. You will lose that fight. If a shark’s just curious, you could use the point of your speargun to “push” them away. A powerful jab at their nose won’t do them any long-term harm, but it may be the incentive the shark needs to bugger off.

It goes without saying that anytime you’re at the beach you need to be careful. There are currents and rips in the water, and that’s before you factor in all the other people. Boats are your worst enemy, and I’d highly recommend getting a floating line with a “diver below” flag to ensure they actually see you. It’s also essential to never dive alone. Bring a buddy along who wants to learn spearfishing too, as they can keep an eye on you should anything go wrong. With all of this, the best advice I can give you is to be smart. Don’t swim out into a rough ocean, don’t do it alone, and make sure you’ve got the right gear and equipment to make your spearfishing expedition a success.

In the aftermath of a crisis, it’s all up to you. Forget the government and their handouts that never come. Forget lining up at the local soup kitchen for a measly bowl of soup. Buy yourself a speargun and teach yourself how to catch your own fish. And be a provider for your family, no matter what happens to the rest of the world.

How to Entertain your Family Without Electricity

Home Defense Tactics That You Need To Know Before SHTF

The Most Powerful Natural Antibiotics Known to Mankind

3 Best Pre-Built Shelters for a Disaster

This Is How Tyrants Control the Masses