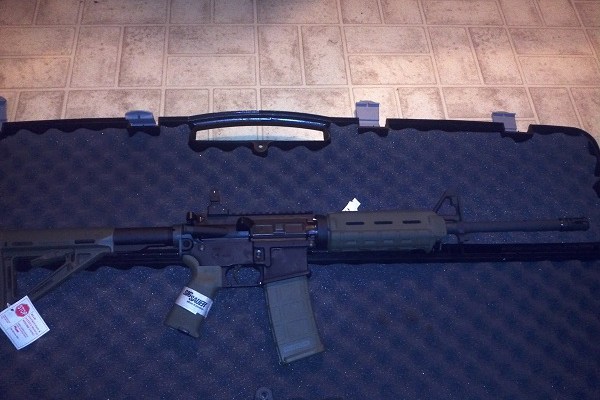 Since the development of gunpowder wars have been fought with some form of rifle. Today, with modern warfare bringing in close quarters combat rifles are still the primary weapon of choice. Just like any other conflict in an SHTF event, everyone with a dog in the fight should have some type of main battle rifle. Believing that battle rifles must be at least a particular caliber at minimum or absolutely semi-automatic might limit options. Having requirements from such rifle is great but when things go south I’d like to see everybody equipped with some sort of rifle. Being a sharpshooter with an old bolt gun is better than being mediocre at best with a sporting rifle.

Bolt action rifles generally have better long-range accuracy than their semi-auto counter-parts of the same caliber. A quality bolt-action rifle can be bought for much less than most quality semi-auto rifles go for. A good bolt-action should be equipped with a quality scope to fully utilize the rifles maximum effective range. Adding a scope really adds to the cost of the rifle and it’s not uncommon for people to use scopes that cost more than the rifle itself. I have a $300 bolt gun with a $200 scope I use for hunting.

Bolt rifles are limited in mechanical parts making them easily maintained and very reliable. Semi-auto battle rifles are better designed for fighting due to automatic cycling. Benefits of the semi-auto include quicker follow-up shots and the ability to use suppression fire.

Ideally, I would recommend semi-auto rifle to most people in need of a good MBR. Semi-auto rifles don’t come without disadvantages. They have far more mechanical parts that could break and require more maintenance. Plenty of good semi-auto rifle platforms are available that has proven more reliable so be sure to research your rifle selection. Good research will help you be aware of its limitations and maintain it properly to keep it functioning as designed.

ArmaLite Rifles also more commonly known as the AR15 is the civilian version of the military issued M16 or M4 platform. Basically an identical rifle to the military platform without the 3 round burst or fully automatic features. AR15’s are the most popular sporting rifle in the country and it is estimated to be 20-30 million lawfully owned sporting rifles in America. One would believe that number largely consist of AR15 style rifles.

Obviously, it’s probably the most common rifle in America today and with good reason. Perhaps being completely biased here, but I believe it to be the best option for most people selecting battle rifles. Limitations do exist though and should be considered when determining how practical the rifle is for your needs.

First off, the popular .223/5.56 falls short on the maximum effective range versus the 30 caliber competitors. For engaging targets beyond 300 yards routinely you might want to look towards a .308 AR10 platform. When comparing AR15’s to AK47’s the ArmaLite rifles tend to be more finicky with harsh conditions such as dirt and debris. Good weapons maintenance should be hard to keep your AR functioning flawlessly.

Perks of having an AR15 Battle Rifle

Time and experience over the years have taught me many great things about the AR15. Women and younger adolescent children are able to shoot this rifle due to its low recoil. Aftermarket parts allow for a virtually endless option of configuration. The .223/5.56 round packs a big punch for its size. Most likely one of the primary factors in the US Military’s use in the rifle is the light-weight of the ammo allowing troops to carry more. Ammo is relatively cheap compared to some other calibers which make it more affordable to train and improve marksmanship.

Upper receivers can be replaced with a few different higher calibers such as the 6.8spc. Replacing uppers allows for different calibers and configurations specific to the mission. For example, some might switch their AR15 upper to 6.8spc for hunting larger game such as white-tail deer or hogs.

Built on the same design as the AR15 but bigger and heavier. The .308/7.62 round is an awesome round in comparison with the less than adequate .223/5.56. Unfortunately, the AR10 rifles don’t have as great as reliability reputation as their AR15 counter-parts and that is its biggest downfall really.

Aside from being much heavier, the additional weight comes with additional perks such as increased penetration. Shooting a larger 30 caliber round increases the ability to disable a vehicle or take down larger game. Carrying the same amount of ammo would be much heavier of a load.

Imported rifles such as the AK47 or SKS used to make great battle rifles for those on a budget but in recent years the prices have gone up. At one time you could purchase 2 or 3 AK’s for the price of a single AR15 rifle, but that’s no longer the case. Today the average cost of an AK47 is just a few hundred less than a decent stock AR15. AK47’s have a reputation of being extremely reliable and eats any ammo you feed it. Having the ability to buy and shoot the cheapest steel cased ammo without the worry of it causing your rifle distress is certainly an advantage.

SKS and AK47’s are both chambered in the .762×39 which is also a 30 caliber bullet. Ammo for these are generally not too difficult to find and offers the ability to take down larger game. These imported rifles are not known for their accuracy and while they have a relatively high effective range are generally not accurate at such ranges. Due to this lack of accuracy, it’s not recommended for hunting.

What will you do If an EMP Strikes at Work?