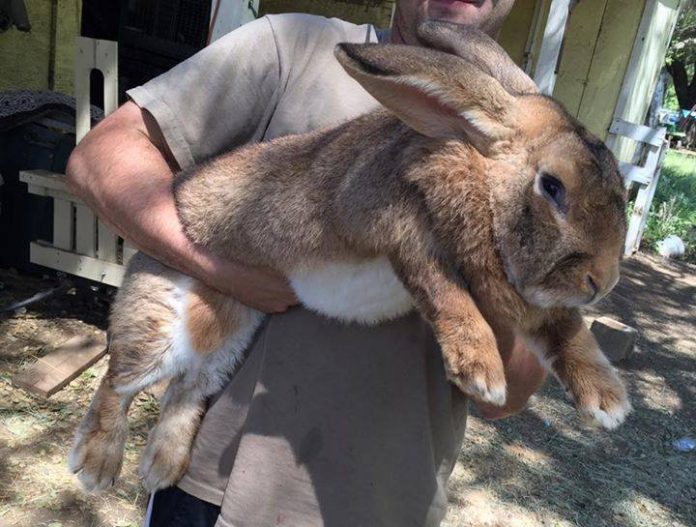 It’s been said many times that meat rabbits and goats are a poor prepper’s cows, but I don’t think that mantra is quite right. Don’t get me wrong, cows are great — although they intimidate me a bit, which is insane because I love horses — but not everyone has space, equipment, or skills to raise and butcher cattle.

Meat rabbits (as well as pygmy and Nigerian dwarf goats, for that matter) take up so little space that a smart prepper, not necessarily one with empty pockets, can raise and butcher them. Even an urban prepper probably has enough space to keep a mating pair of meat rabbits in a city apartment.

The key to raising quality meat rabbits, especially for novices, is starting small. Invest in proven breeding stock and buy just one buck and one doe. Rabbits, as we all know, reproduce rapidly.

A beginning keeper simply won’t be able to adequately keep up with the daily health checks, feeding, and hutch cleaning necessary for multiple breeding pairs or groups from day one — at least not while producing illness-free animals that churn out satisfactory meat.

Once you truly learn the cornerstones of meat rabbit husbandry, then it is time to expand your colony and start butchering and preserving the meat for an SHTF event. The perfect meat rabbit colony ratio is one buck to two females. Such a set up should most likely produce up to 50 kits (baby rabbits) on an annual basis.

A small colony of rabbits, regardless of the meat breed, can produce more than 300 pounds of just female kits per year, creating a steady supply of future breeding does. A small rabbit colony, one that lives in only a humane 3-foot by 2-foot hutch, could ultimately produce around 960 pounds worth of kits each year.

It might sound shocking, but it does not take long to wind up with a rabbit colony with 100 members if you purchase multiple does and a buck or two.

Here is a brief breakdown at the amount of work per week that is required to care for such a large colony while waiting for them to reach butcher weight:

As you can see, whether you are a smart prepper or a poor prepper, or both, you will be putting in a whole lot of time inside the rabbit pen if you attempt to keep a large colony.

There is a lot of benefit to keeping a large rabbit colony, but doing so while still learning husbandry techniques, including butchering and preserving, which was not factored into the above list, requires a substantial time commitment and can become very overwhelming.

In spite of the time commitment, raising rabbits for meat is worth the effort. 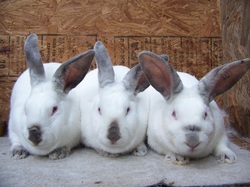 These meat rabbits are stocky and often grow to weigh about eight to twelve pounds. They are a cross-breed between Chinchilla rabbits New Zealand Whites. 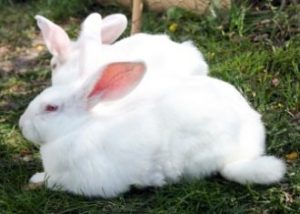 This breed of meat rabbits is perhaps both the most common and the most popular. They routinely weight between nine to twelve pounds. It is not uncommon for kits to reach eight pounds when they are only about eight weeks old. 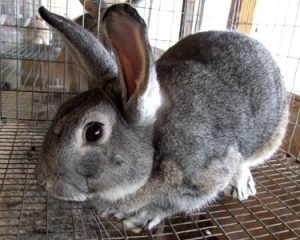 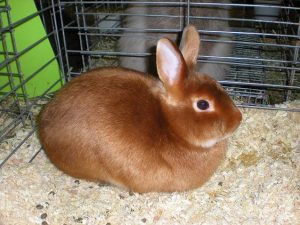 It would be difficult to find a more cold-hardy meat rabbit than the Satins. They boast a thick fur that is also heralded for its beauty. These meat rabbits commonly weigh about twelve pounds when fully mature. 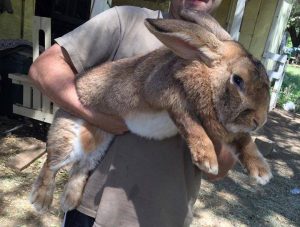 It may cost a little bit more to keep this meat rabbit breed due to the voracious appetite of the animals, but they do regularly weigh up to twenty pounds when butchered. 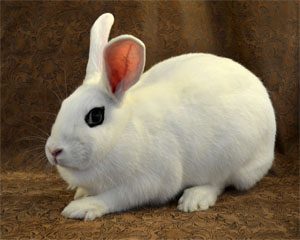 These are among the largest breeds of rabbits and are also a heritage breed. They were created in France during the 1900s and were only the second rabbit breed to ever stem from breeding cultivated by a woman. Typically, Blanc de Hotot meat rabbits weigh about eleven pounds. The does are highly regarded for their robust litters and maternal instincts. 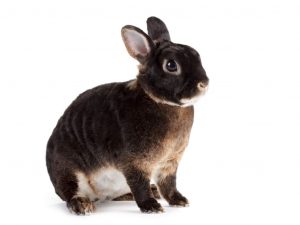 Mature meat rabbits of this breed generally weight around ten pounds. Rex rabbits also boast a beautiful and thick fur that has long been used in making outerwear and linings. 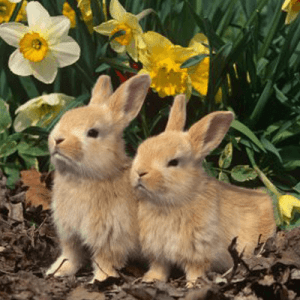 This meat rabbit breed has been popular in the marketplace for decades. They commonly grow to weigh between eight and eleven pounds. 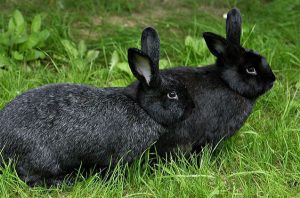 These rabbits have long been a favorite among homesteaders. They are not always easy to find, which means selling some of the offspring could help fund the feeding and caring of a rabbit colony or be used to purchase other needed preps. They commonly grow to weigh between ten and twelve pounds. 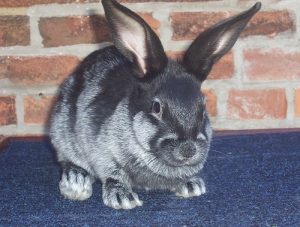 This moderately stout rabbit breed has been raised for meat production since the early 1600s. They typically weigh about nine pounds when mature enough for butchering. 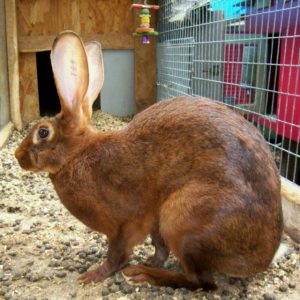 This heritage breed of meat rabbit is also a threatened breed due to the declining numbers currently being raised around the world. The Belgian Hare was instantly popular on the meat market when it was first introduced in America during the early 1900s.

A single rabbit of this breed could sell for up to $5,000 each during their heyday. In fact, millionaires like J.P. Morgan even invested heavily in the breeding of Belgian Hares to increase their private fortunes. Unfortunately for the folks hoping to get rich on the backs of rabbits, they found themselves with filled hutches in an over-saturated market after prices dropped dramatically.

The rabbits have fine bones and produce lean meat. These rabbits have been known to be fairly difficult to breed. The breed is extremely active and needs plenty of room to deter poor behavior. Mature Belgian Hares tend to weigh between six and nine pounds. 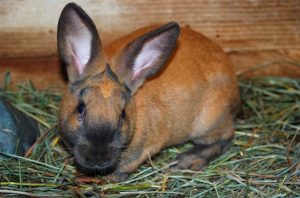 Rabbits of this meat breed typically weigh about ten pounds. The breed was created accidentally during the early 1970s after a little girl in Montana received a Chinchilla rabbit for Easter. It bred with New Zealand Whites she and her brother later acquired, and eventually, the kits were also bred with their father’s Checkered Giant and Californian rabbits. The breed is named after the beautiful color of their coats.

Once you choose the type or types of meat rabbits to raise, it is time to go shopping for all of the necessary husbandry supplies.

Here is a breakdown of the bare essentials in rabbit husbandry and their approximate cost:

Rabbit Hutch – You can make you own out of scrap wood and wire for next to nothing if you have such materials available. Always use a sturdy gauge of hardware cloth fencing and never chicken wire.

A hutch designed to house two rabbits should be approximately 3 feet wide, 30 inches deep, and 20 inches tall. The wire used on the floor, sides, and bottom of the hutch must keep out small predators like mink and raccoons who can get through chicken wire and be supportive enough not to sag beneath the weight of the rabbits.

The cost of a commercially manufactured small rabbit hutch is about $50, with larger cages costing as much as $200.

Feeder – A plastic or metal feeder large enough to feed at least one rabbit typically costs about $10 and are usually between nine and twelve inches tall.

Waterer – These husbandry supplies also cost $10 or more each. They are often made so they hang outside of the hutch with the bottle portion being made of plastic and the metal drip waterer that goes inside the cage made of metal to deter chewing by the rabbits.

Nesting Boxes – Each doe will need her own nesting box for protection against inclement weather and during breeding. They are commonly sold or constructed at home out of either wood or metal – the rabbits will eventually chew through and shred plastic nesting boxes. Nesting boxes usually sell for anywhere from $10 to $25 each.

Fans – Many rabbit keepers and breeders use solar fans that can be attached to the hutch to keep the rabbit cool during the summer. When temperatures get over 90 degrees, rabbits (especially pregnant or nursing does) can die of heatstroke. Solar fans also sell for about $20 to $35 each.

Lights – Placing some solar landscaping lights in the ground around the hutch and/or solar motion-detecting lights on the hutch, can help deter predators. Prices for lights varying depending upon dimension and type but can typically be purchased for less than $30 each. Dollar stores often stock single landscaping solar lights.

Heaters – Solar powered heaters to help keep the rabbits and their kits warm in the winter generally cost between $50 to $75 each.

Feed – A bag of rabbit feed generally ranges in price from $9 to $25 for a 50-pound sack. A squad bale of hay typically costs about four or five dollars.

Bedding – The rabbits will need bedding to sleep on and to make a place to keep their kits in the nesting boxes. A square bale of straw usually costs about $3.

50 Foods to Dehydrate for Your Stockpile

What is Your Favorite Food to Stockpile?

How To Tell The Difference Between The Healing “Queen Anne’s Lace”...