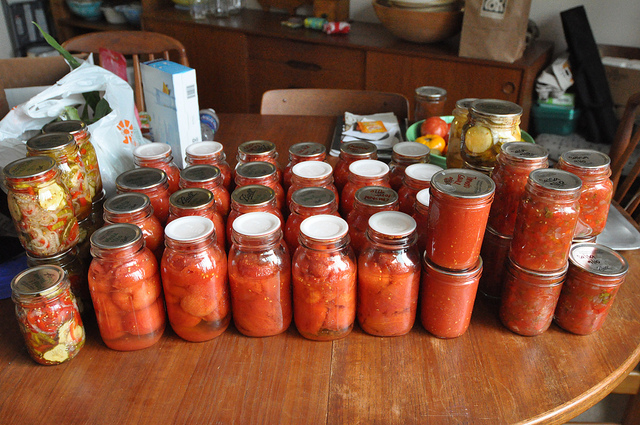 Home canning would be a necessary skill if you’re ever put back on your own income for the long term. You can’t grow your own vegetables all year round, there is a growing season followed by a harvest season, and how long they are determined by the climate and when they end. When your crop has been harvested for the year, that’s it, there will be no more until next year. 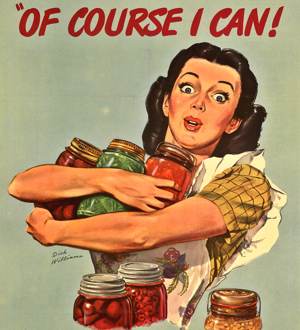 In order to keep your diet healthy throughout the year, you’ll need to preserve the bulk of what you’ve grown for later use. Freezing is the simplest way but what if power has become unreliable? Even a blackout of a few hours might ruin all that you’ve stored. Canning is the only reliable way to preserve your own vegetables, and that means it’s a skill everybody should have.

Canning is not a complex process and, in the way of equipment, it does not require much. So long as you have the appropriate jars, lids and a way of boiling water, you’re all set. But what it needs, is attention to detail. If you’re not careful, you might end up spoiling food in the jar – or becomes a deadly hazard.

Food spoils as some nutrients it contains break down by oxygen, and microorganisms emerge and feed on it. Canning preserves the food by providing protection against both of these threats. If the food is inside the jar, and the oxygen and microorganisms are outside, they can not get inside to spoil the food. Right?

Okay, kind of. This is the basic concept, but when you put the lid on, it’s not as easy as having a strong seal. Inside the bottle there’ll still be some oxygen stored, but if there’s too much it might be enough to destroy the contents until it’s all used up. Too much oxygen can also allow growth of bacteria or mold. Before you seal them it, is essential to get as much air out of your jars as possible.

That can, unfortunately, trigger another, and much more serious, problem. Most bacteria will not grow if there is not enough oxygen in their atmosphere, but if there is too much, there are a few which will not grow. Some of them are harmless, others can cause you an upset stomach, but one of them is actually lethal – and it grows in food that hasn’t been properly canned like wildfire.

This microbe is called the Clostridium botulinum bacteria. It is very natural in soil, and is present throughout the world. Many foods are rapidly exposed to the bacteria. This isn’t normally a problem though. In a normal environment C. Botulinumis dormant, and if there is more than two percent oxygen in the air, it can not expand. However, put it somewhere with little or no oxygen and it will begin to grow rapidly – and, as it grows, it will produce a neurotoxin. The popular term for this is botox, that is what some people have injected into their skin to get rid of the wrinkles. But the treatment of wrinkles uses tiny amounts of highly diluted botox, and here’s why:

Botox is the most toxic substance ever found – much more lethal than cyanide, rattlesnake venom or military nerve agents. One ounce of pure Botox will kill 175,000 people – and all it takes to kill you is a fraction of a milligram in a jar of contaminated food.

Properly canned food is free from contamination with botulinum-but do it wrong and you are playing Russian Roulette. Sooner or later, if you do not take the right precautions, you can open a container that has a colony of C. Botulinum which grows indoors. If you notice the symptoms in time and can reach a good hospital, it can be treated easily enough-but in a SHTF scenario you’re dead.

When you rely on your own resources, the only defense against botulism is to prevent the bacteria from getting hold of your food properly. The way to do this is to stop certain fatal mistakes.

The fewer bacteria that go into the container along with your fruit or vegetables, the lower the chance of infection. Which means you have to make the food as clean as you can before it gets into the jar. Anything that grows above ground should be washed thoroughly, but even after scrubbing, vegetables that are exposed directly to soil will probably not be clean enough. Instead, peel them, to ensure that all residues of soil and bacteria are removed. Tomatoes should be peeled too. For added safety, blanching can kill tons of bacteria.

Once you have cleaned your produce, do not contaminate it again. Jars, lids and other utensils that you use need to be sterilized. Clean enough to cook food usually does not mean clean enough for a canning. It doesn’t matter much when you cook dinner and a few bacteria escape through it-they won’t have time to develop. When you are planning to store canned food for months or years it’s a different ball game. But if you fill the container with only a few bacteria, there may be trillions of them by the time you consume the contents.

Related: How Do You Know if a Canning Recipe is Safe

C. botulinum grows best in a non-acidic environment. Acid slows the bacteria’s growth and can even destroy them. Unfortunately, most of the vegetables popular with home canners have a low acid content, making them more likely to host botulinum. Tomatoes are one exception; varieties are low-acid, but you should avoid those for canning. Try adding a little acid to the mix along with other vegetables. Vinegar or lemon juice are good options to enhance the flavor, too. You don’t have to add enough to pick up the ingredients, but if you can drop the liquid’s pH below 4.6, it will do a lot to keep the food safe.

Fruits have a much higher acid content than vegetables, except for bananas and some varieties of apples and pears. This doesn’t eliminate the botulism risk but it reduces it.

Temperature is one of the most effective ways of killing bacteria, including C. Botulinum-if you use a sufficiently high temperature for a long time. Fruit and tomatoes – acidic foods – can be canned safely using boiling water, as the chance of botulism is small anyway. The same applies to other vegetables which have added acid. Nonetheless, simple boiling does not offer any safety margin for less acidic foods. When you canned meat or vegetables with low acidity, the best way to ensure health is to heat them to at least 240 °F and this means using a pressure canner. If you’re canning without electricity a pressure cooker can be used. A pressure cooker approved by the USDA should boil water at a temperature of 250 °F which gives a good safety margin.

Check the seal until it’s put on every bottle. Press metal lids with one finger; the container is not properly sealed if there is some give in it. For screw band type lids, you should remove the band and pull gently at the lid. If it’s sealed it will stay on the jar; if it comes off, refrigerate the contents or eat them right away.

Storing your canned food in the wrong place will shorten its life quickly, decrease its quality and even make it unsafe. On the other hand, it will be preserved and stored correctly and will remain safe.

Clear glass jars let light in, and many canned foods may color up. This is not a serious issue but it makes them less appetizing. Keep your jars somewhere dark-or, at least, out of direct sunlight.

Look for a cool place. Heat is essential in the actual canning process but it becomes an enemy once your jars are sealed. Temperatures above 75 °F can make vegetables mushy, and also encourage growth of micro-organisms.

Humidity is bad news too. Glass is immune to this, but it can rust on the lids and screw bands. It will take them a while to rust right through, but rusty edges will begin to leak tiny amounts of air. Botulinum won’t help because there are plenty of other bacteria and molds that can kill your food and make you sick.

Do not simply open a jar of canned food and dig your spoon in. Before opening inspect the container; is anything cracked or distorted? Do the contents look discolored? Got any signs of leakage? If you spot any of those stuff, throw the food away. There should be a rush of air when you open the jar as the vacuum breaks inside; if there isn’t then the seal might have broken, and the contents aren’t secure. Get rid of whatever spurts liquid or foam when you open it.

Any sign of mold within the jar means it is either leaked or has not been properly sterilized to begin with. The mold itself might make you sick, but it’s also an indicator that there could be a bacteria – and is likely to – grow. Throw them away.

Find Out What Areas Would Be Targeted by FEMA When SHTF...

How To Grow Your Own SHTF Pharmacy

How to Build a First Aid Kit – Prepper Edition

How to make a 2-Ingredient Homemade Toothpaste