Nothing sets the tone of a survival situation or emergency in the woods like fire. While you may be facing things that fire cannot solve, like an injury. It will make an enormous difference in your mood and behavior as those flames begin to grow. Realizing that you now have access to clean water, heat, protection and you can cook a warm meal.

FIRE MAKES SURVIVAL POSSIBLE SO IT MAKES SENSE THAT YOU KNOW AS MUCH ABOUT GETTING IT STARTED AS POSSIBLE, RIGHT?

We are going to look at one of the most confusing subjects in survival today. When we start to break fire-making down to the implements and tools they tend to get jumbled. We all know about lighters and matches but what about flint and steel, fire steel, Ferro rods, magnesium bars and the like.

While there are many contraptions out there that can start a fire and make sparks. You really only need to understand the two big players in the game. They are both pretty old but outside of matches and lighters, none get it done better. These two big players are ferrocerium and flint and steel.

These two types of fire starters are most often confused with one another and other things that just get confused altogether. A lot of this has to do with the fact that people aren’t doing their homework. I know people who use these implements over and over again and still call them by the wrong name.

They can start a fire as it comes out of their fingertips, but they don’t fully understand the tools they are using?

Related: How to Make a Fire Response Plan – 7 Steps

Is this a problem?

I guess that all depends on the person. It does you no good to know the structural makeup of the metal alloy we call ferrocerium if you cannot use it to keep yourself warm or boil water. If you cannot start a fire with it, all the knowledge of what it is will not keep you alive. Still, there is something to be said about using the right terms and knowing your tools.

Someone could be a master with an ax but if they call it a hammer you might look at them funny, right?

For this reason, I wanted to talk about the mechanisms and the makeup of these two items. Personally, I think an understanding of the tools and practice makes you the most formidable. If you want to be proficient at one thing, let it be fire because it solves so many life or death problems.

The very best place to start in all of this is to talk about what makes these two tools differ from one another.

Let’s start with the flint and steel as it seems to be the catch-all for many of the other fire starters on the market. This two-component tool relies on several interesting survival elements. At its core, you are dealing with a piece of steel and a piece of rock. That might sound silly, but you really are starting there. 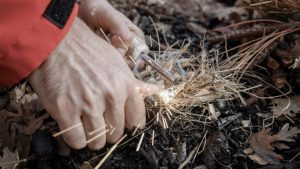 The flint, chert or quartz, (all of which can be used) are merely parts of the world around us. That is where survival element number 2 shows up. For most of us, we understand that a tree is not just a tree and that some trees have tremendous benefits. Such as offering food, medicine, and even better shelter. Well, the world of rocks is similar.

As is everything else on the planet. For survival, we need a basic understanding of the natural world. The way this tool works depends on the flint more than steel. The reason behind flint, chert, and quartz have to do with its hardness. The rock you use will literally be scraping steel off of your striker. That steel will oxidize in the air and spark. If you don’t have the right type of rock it will not be sharp enough to shave the steel and you will get no spark.

Beyond the right steel and the right rock, you will want to carry something called charcloth. A good flint and steel kit will contain all of these items in one. The charcloth is going to catch that little spark that is made from the steel and flint. Otherwise, you are going to need some serious tinder making skills. The steel does not put off the shower of sparks that ferrocerium does. Flint and steel are still very effective tools in regard to fire-starting.

In 1903 Carl Auer Von Welsbach was experimenting with rare earth elements and one such element was Cerium. He found that when combined with iron this rare earth metal was capable of creating sparks when scraped with steel. In fact, the sparks could reach nearly 3,000 degrees Fahrenheit!

Such was the birth of ferrocerium. Most commonly ferrocerium is used as the striker inside common lighters. It is also used in industry but for survival purposes, it’s most commonly used in rod form. The longer and thicker the rod the easier they are to work with.

The Ferro rod can be struck with the back of your knife or the blade of it. While it will create a shower of impressive 3000-degree sparks. You are still going to need to a bird’s nest or some reliable tinder to get the fire started.

Hopefully, this clears up the difference between these two fire starters. They are often confused and that is understandable. They are both ways of creating a spark. You will still need tinder with both methods.

There is something very special about creating that fire without modern fire-making implements. Of course, that doesn’t mean you shouldn’t always pack a lighter and some matches. Just don’t use them first. If you have the time enjoy fire craft use these sparking methods. Keep your lighter and matches for emergency use only.

How to Preserve and Tan the Hide of a Deer

How to Survive Extreme Cold