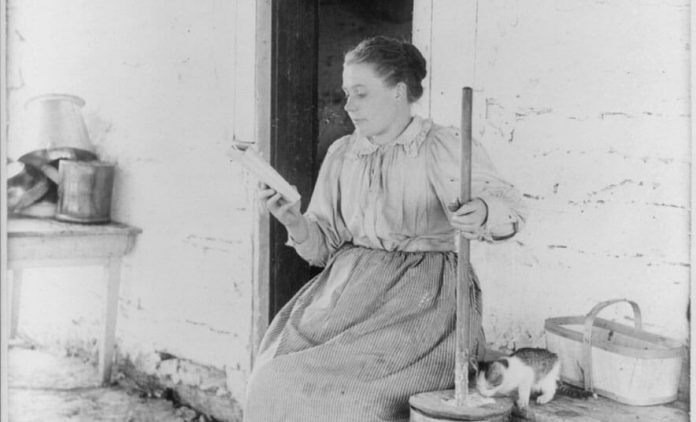 Butter making goes back at least four thousand years, with the earliest known reference to it written in the Bible. When Abraham entertained the three angels, butter was among the foods he offered them to eat before they went on to destroy Sodom and Gomorrah. Apparently butter has been used since mankind first domesticated cattle and was regarded as the food of the gods by many in the ancient times.

Although we do not know how the processing of butter was first discovered, there is some evidence for early methods of butter producing. The earliest such example speaks of putting the butter in a shell, suspending it and gradually swinging it up. Ironically enough, the colonists used this process, or at least something similar, in the expansion of the United States into the West.

Butter is a natural milk product, essentially the milk’s fat. It was collected, isolated from the liquid portion of the milk, and solidified. It keeps much better in this state as the fat doesn’t become rancid as fast as the liquid. In addition, in several Northern European countries, old examples of butter have been found buried in casks in the bogs. It seems as long as air is kept away from the butter, and the butter stays cold (which burying will do) it will last much longer than we would assume. Not just keeping the butter, but improving its flavor.

While we usually say butter is made from milk, it’s actually made from the cream. This is because the amount of fat in cream is much higher than in milk, and butter is just the fat. 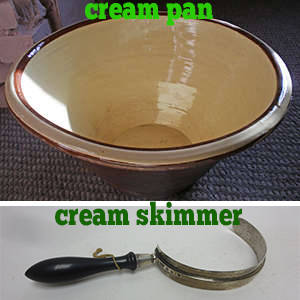 To make butter, the first step is to separate the cream from the milk. This is achieved by allowing the dairy to sit for half a day, without disruption. The cream then rises up to the rim, and the milk settles down. Several large pots, called settling dishes, were widely used. These settling dishes, or pancheons, looked much like ceramic pie pans or casserole dishes.

Then the cream was skimmed with a cream skimmer off top. There were many styles but the most common was shaped saucer, with holes in it to drain through the milk. The collected cream was placed in a mixer, and the milk was reserved for other purposes.

Cream could be gathered over a span of a few days, in situations where a family had only one cow and one day’s cream would not be enough to churn. Depending on the ambient temperature, keeping the cream for up to three days wasn’t a problem, and was actually considered beneficial. The aging of the cream was thought to improve the flavor, as long as it wasn’t kept long enough to sour.

Through the ages, a variety of types of churns have been used, with the most common being the plunge churn or dash churn we’re all used to seeing. Barrel churns have become more popular in more recent times, turning the barrel end over end or just rocking the barrel to churn the butter on. These churns have the advantage of having the larger amount of butter that can be churned at one time. There was also no paddle inside the churn so there was no risk that it would break and no need to clean it.

Related: How to Bake Dandelion Bread

Churning is gathering the fat and extracting it from buttermilk. While pushing the paddle through the cream or rolling the barrel, a fairly slow motion is used. Approximately 40 beats per minute. Slower, and the process takes too long; faster, and the cream begins to become whipped. While this can still lead to butter, it’s slower. 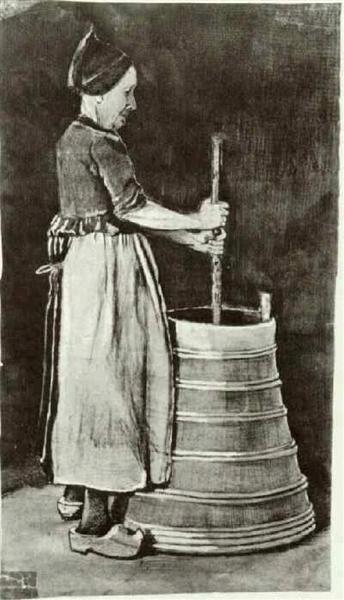 Many cultures had churning songs while churning. The concept was to help maintain churning speed, much like marching armies singing ditties to help keep their rhythm. When you think of usual walking speed, that’s the right churning pace.

The churn itself can be made of almost any material, though most common was wood and ceramic. If we go far enough back in history, copper churns were used, although they affected the finished butter’s flavor. In time, glass churns were sold to families to make their own butter. These had a hand crank to push the paddles, making them easier to use.

It takes about an hour of churning to isolate and collect most milk fat from buttermilk. This point is immediately visible as the yellow butter stands out from white buttermilk. Buttermilk is then poured out of churn, filtered through a sieve and saved for baking. The butter is scooped out and put in a bowl.

As I previously mentioned, pioneers churned their butter like swinging it in an animal skin. Rather than a skin, they ‘d put it in a lid-bucket. This would hang under their wagon as they walked down the trail. The wagon’s natural movement was ideal for churning butter. When they stopped at night, they had to remove the butter and rinse it. Regarding that they only had a small amount of time in camp at night, this labor-saving method allowed them to have fresh butter without difficulties.

All buttermilk must be taken out of the butter to avoid spoilage. Buttermilk spoils much quicker than butter, so the “cleaner” the butter is, the better. It is achieved by rinsing the butter in a series of water baths, using hands or a pair of paddles to work the butter, called “butter hands.” It doesn’t stick to the hands, either yours or the wooden ones, because butter is fat. As the butter reaches its final rinse, salt is added. That helps to flavor and preserve the butter. Salt is a natural preservative which kills bacteria by drawing out the water. Salted butter therefore will last longer than unsalted will.

The almost finished butter is placed into hardening containers. This could be molds of butter, to make sticks or crocks. Using the butter hands it could also be rolled into balls and prepared for use in that way. It was easier to roll into balls to serve at the table, rather than to place a big crock on the table.

Homemade butter is stronger than the one you buy in the grocery store and can refrigerate for longer. The amount of time that it will stay nice varies with temperature, though. Butter doesn’t last as long as it does in colder temperatures during the summer or in warmer climates. When it isn’t used soon enough, it will grow rancid.

Related: How Does Epsom Salt Work?

Muffins To Treat Your Flu This Winter

5 Insects You Can Munch On To Survive In The Jungle