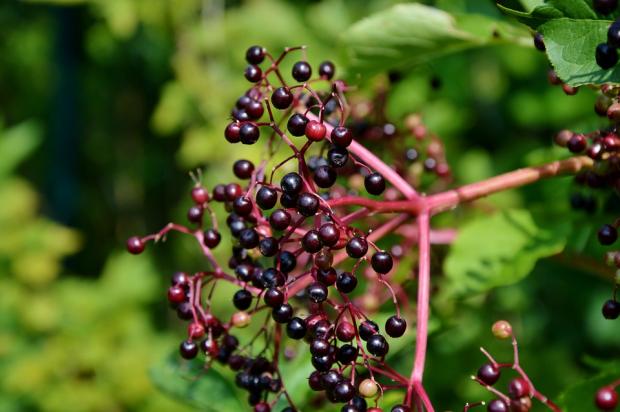 The flu can be deadly even before a SHTF disaster when modern medical care is still readily available. The 2017-2018 winter flu season has been the most deadly in several years.

Growing your own apothecary is the best way to keep both yourself and your family healthy during a doomsday disaster. Elderberries not only contain a higher vitamin C content than oranges, but they can be brewed into a tea or turned in a syrup to help sick loved ones recover from the flu.

Each year, tens of thousands of people get a flu shot, and still get the flu. Why? Because the vaccines are made before the latest strain of the illness has finished evolving AND because of faulty or contaminated vaccines – which also happened this flu season.

The flu is not what kills you, it is the symptoms of the virus and the secondary infections and immune system deterioration it causes. Once the flu virus enters the body, it starts hijacking cells in the throat and nose to literally make copies of itself before invading the entire body.

To combat the attacker, the immune system calls up the troops, antibodies, inflammatory molecules, and white blood cells, just to name a few. The flu virus usually goes to battle with the lungs and respiratory tract first.

People who become extremely ill or die from the flu, usually suffered an abundantly strong response from their immune system that destroyed good cells, tissue, and molecules, along with the bad. When tissue in the lungs can’t push enough blood and oxygen through, hypoxia occurs, followed by death.

Keeping the immune system strong and healthy on a daily basis, so it is prepared to fend off the flu and getting the symptoms of the flu under control immediately, can save lives.

Any Daily Prepper News readers who are also Walking Dead fans, might remember the scene when Hershel ventured outside of the prison to collect berries to make a tea to help treat the members of the group who were dying from the flu until the others got back with antibiotics from a veterinary school. 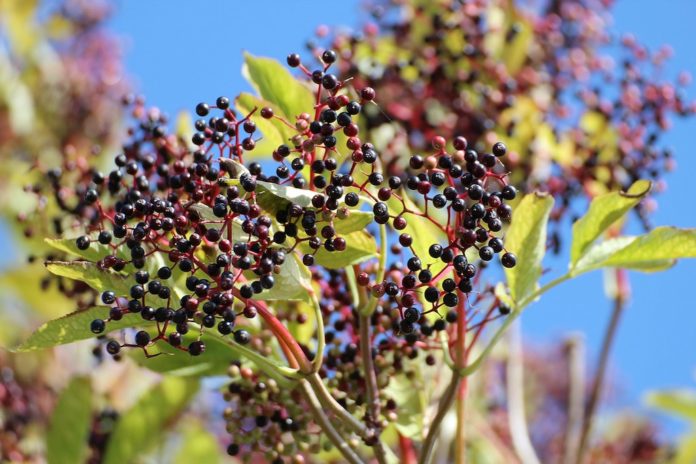 Elderberries were what Hershel went to pick in the walker-infested woods. For centuries, Native Americans and folks in my own Appalachian hills (among many other herbal remedy fans, I am sure) have used elderberry tea to treat the flu and the common cold.

Researchers from the Hadassah-Hebrew University in Israel have conducted studies into why and how elderberries help boost the immune system and beat the flu. The berries are known to stop the production of hormones like material in white blood cells that cause inflammation common with both the flu and arthritis.

The elderberries, which boast a high content of vitamins A, B, and C, also increase the production of non-inflammatory infection-fighting material about tenfold. Elderberries have been known to effectively treat eight different strains of the flu, according to the tests at the Israeli university.

The types of conditions that elderberries have been used to treat, in addition to general immune system boosting, include: swine flu (H1N1), nerve pain, sinus pain, leg and back pain, rhinitis, HIV/AIDS, constipation, chronic fatigue, and cancer.

Dried elderberries can be eaten by the handful, just like the wild black raspberries that grow in many regions around the United States. The berries can be turned into a delicious syrup and used in baking or pancake recipes, or brewed as a medicinal tea. Elderberry tea usually has a slightly sour taste, so pinch off some stevia growing in your garden, or pour some sugar to sweeten it. 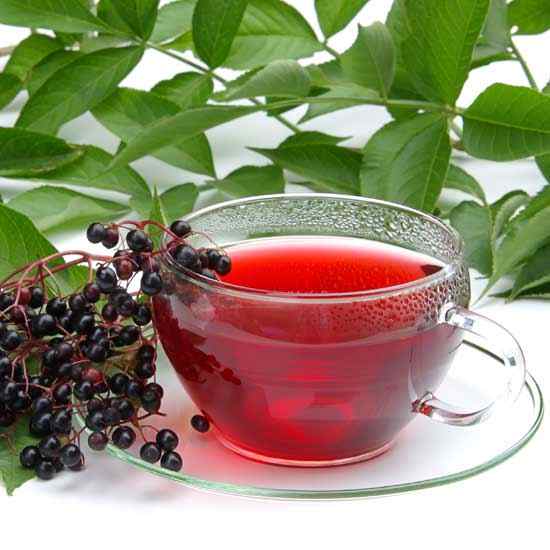 • ½ of a teaspoon of turmeric

• ¼ of a teaspoon cinnamon

1. Put the berries, water, cinnamon, and turmeric into a small pot.

2. Bring the mixture to a boil, then reduce the heat and allow it to simmer for approximately 15 minutes.

3. Remove the pot from the stove and allow to cool slightly, for approximately five minutes.

4. Strain the mixture into mugs through cheesecloth or a coffee filter.

5. Stir in the honey and drink.

6. You can also allow the tea to cool completely after adding the honey and pour it over ice for a cold tea. 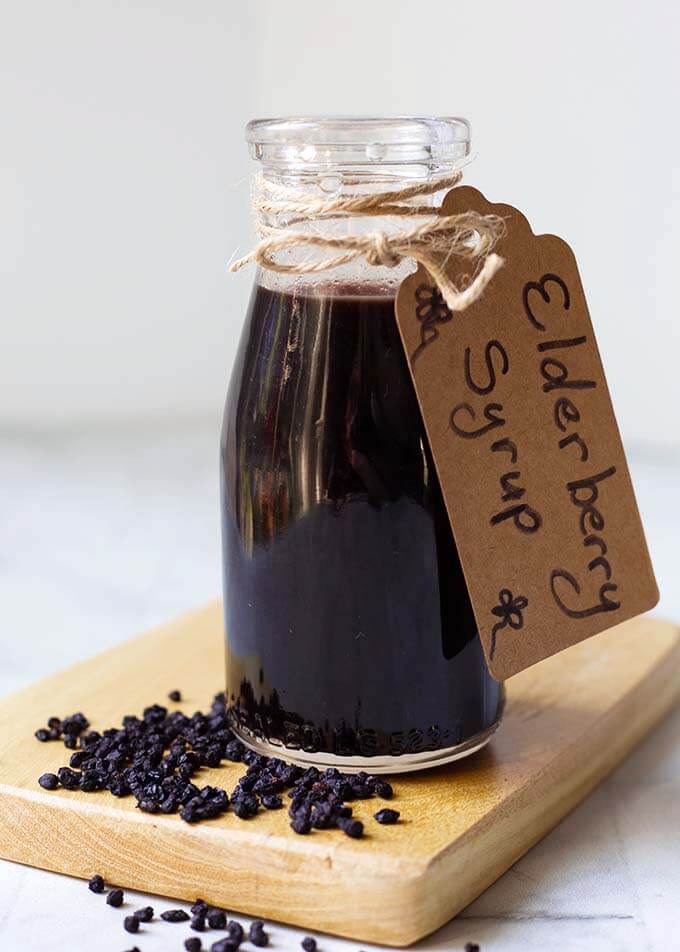 • Optional but recommended ingredients: ½ of cloves and 1 tablespoon of ginger root – dried

1. Pour the elderberries and water into a pot.

2. Add in the cinnamon and any optional ingredients.

3. Bring the mixture to a boil, cover, and reduce to a simmering heat for approximately 45 to 60 minutes. The liquid in the pot should simmer down to about half of its former level.

4. Remove the pot from the stove and mash the berries with a wooden spoon or similar manual kitchen tool.

5. Pour the mixture into a bowl through cheesecloth, coffee filter, or similar strainer.

6. Once the strained mixture has cooled, pour in the honey and stir thoroughly.

7. Pour the mixture into a one-quart Mason and secure the lid. The elderberry syrup should be refrigerated in between uses.

8. Dosage: On a daily basis as an immune system booster or preventative, adults are recommended to take up to 1 tablespoon of the elderberry syrup. It is recommended that children be limited to a ½ a teaspoon to 1 teaspoon of the syrup. If taking the syrup during a bout with the flu, it should be ingested about every three to four hours or four to six times per day, depending upon your symptoms. 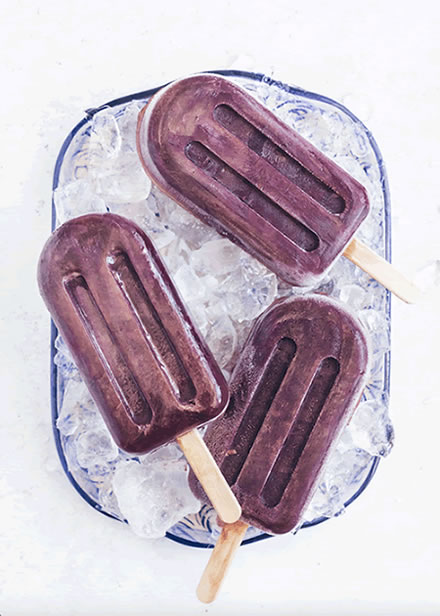 • ½ cup of either blackberries, blueberries, or raspberries

1. Put the berries and the water into a pop and bring it to a boil.

2. Reduce the heat and allow it to simmer for about 15 minutes.

3. Strain the mixture like you would with the tea.

4. Pour the strained liquid back into the pot.

5. Sprinkle the gelatin over the mixture and allow it to become fully absorbed for a couple of minutes.

8. Blend the juice and berries together in a food processor or blender, pour it into the pot and stir to combine.

9. Pour the mixture into popsicle molds and freeze. 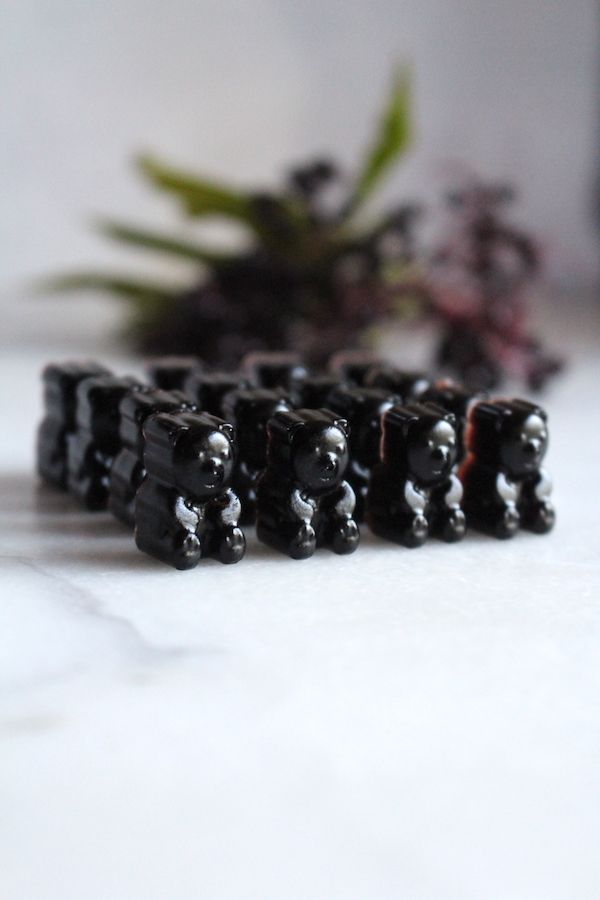 • ¼ of a cup of elderberry syrup – cooled

• ¼ of a cup of gelatin powder

1. Grease the molds to prevent the gummy vitamins from sticking.

2. Mix the elderberry syrup and the gelatin powder thoroughly – whisking it is best

3. Mix in the hot water and stir consistently until it is completely combined.

4. Pour the mixture into the molds.

Related: Black Seed – The Remedy For Everything But Death

Elderberry bushes typically churn out fruit more quickly than many other types of fruit-producing trees or bushes. Usually, you will get a full harvest of elderberries from you bush within just one or two years of planting.

They area very low maintenance plants that pioneers once considered nothing more than a ditch weed – until they discovered how sweet the jelly and wine made from them could taste.

Elderberries are hardy in agricultural zones three through eight. The bushes also make great natural fencing material. In only about four years times, a single bush can turn into a full and very dense hedge.

• Bare root plants and starts cut from existing bushes should be planted in the early spring.

• Container plants can be planted at any time of the year if they are started indoors.

• Elderberry bushes thrive in a soil that has a soil pH balance between approximately 5.5 and 6.5 – but they have been known to grow just fine in well-drained soil with higher alkaline content.

• Elderberry bushes require frequent watering during their first year of growth, but are very drought tolerant in following years.

• The bushes thrive in full sun but can tolerate being planted in areas with partial shade.

• If the elderberry bush is growing normally, expect to see white flower clusters appear in the spring to early summer months. The white clusters will be followed by tiny green berries that turn purple and then black by the end of the summer.

10+ Things To Do To Winter-Proof Your Home

What Really Happens to Your Guns in Winter (it could get...