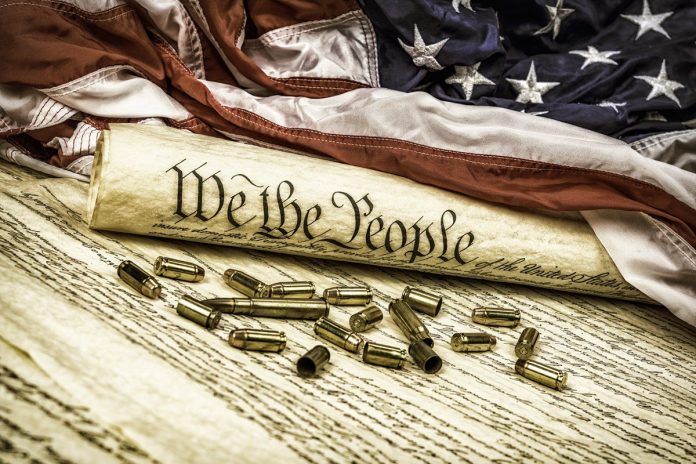 I provide a list of the enemy’s killed, wounded, and hostages from the beginning of hostilities at Lexington in April 1775 until November 1777, because there was no incident of any significance … I believe it was about half the amount lost by them overall, more in some cases, but less in others. This distinction is due to our excellence in targeting when we fire; every soldier in our army has been intimate with his weapon since his childhood. – Thomas Jefferson, letter to Giovanni Fabbroni, June 8, 1778

The most significant thing about the 2nd Amendment for you to realize is that it’s always under fire. No matter what the pressing problem is, it does not matter. It could be a border wall, it could be health care, it could be an overseas invasion, there’s still a lot of individuals trying to find out how to take another bite out of your gun rights.

Luckily for us, states have a big say in people’s gun rights, but not all states are on the gun owners’ side. Do you know the very best and worst gun owners’ states in the Union? We’re going to look at five of the best and five states you should be running away from.

We have to understand what best means first to determine the best states in the nation for guns. The best quantifier for a successful gun state, of course, must come from the 2nd Amendment’s origins.

Our freedom to carry and bear arms shall not be infringed, so it would make sense that those who do their best not to infringe would be the very best states in the nation for gun owners.

One example of how a state could be graded is items such as CCW permits or concealed carry permits and the ability to obtain them. Some states make it a really easy operation, while others require you to leap through flaming hoops just to apply for a CCW permit while juggling.

There are states that allow open carry and even those that without a permit allow concealed carry.

We may also look at laws and the attitude towards firearms. At any given moment, if you are searching for indicators of states that embrace gun owners, the intentions and proposed laws of the public “representatives” are a great indicator.

How do laws in the state handle these MSRs? Today, modern sporting rifles are something that would be known as “assault weapons” by more traditional states and seem to be hell bent on restricting possession and access to the citizens of their states.

When it comes to possessing items such as SBRs or Short Barreled Rifles, suppressors, machine guns, shotguns and other explosive weapons, states have varying degrees of legislation.

A big part of gun ownership is how you defend your home. The value of allowing such weapons, such as shotguns, for home protection seems to be recognized even by the most extreme Federally proposed gun laws. Your right to use force to escape death, forcible crime or bodily harm, however, can vary widely from state to state.

In all of these cases, and maybe even in some regions outside of these, the safest states for gun owners will perform well. It goes back to the basic 2nd Amendment declaration at the end of the day.

Related: What Kind Of Guns Are Best Stored To Leave As An Inheritance

The 5 Worst States for Gun Owners

While it is easier to receive a permit to carry in this state in rural Massachusetts, it is still a “may issue” state, and people in Boston will have a real battle to get one of their own. To purchase any weapon or ammunition in this state, you will need a license and that is as ugly as anything you will find on this list.

In MA, assault weapons are forbidden, as are magazines containing more than 10 rounds of ammunition. Sad state for the birthplace of the American Revolution.

It should come as no surprise to anyone that the gun rights in this state are some of the worst in the country. A Bastian of liberal ideology. In this state, the gun owners face hostility from both politicians bent on crushing the 2nd amendment and people are just as anti-gun as they are. It’s such a mess that with their service, Remington firearms are heading out of the state.

The NY SAFE Act that followed the Sandy Hook Shooting raised the State’s level of gun limitations. There were no grandfathered magazines above 30 rounds, and the meanings of assault weapons have greatly increased. In order to stifle 2nd Amendment rights, New York has taken and will take all steps. They have people’s support, too.

In Chicago, we all use this sad and violent crime as ammo against gun laws. The dreaded FOID is needed by Illinois. This is an identification card for the owner of weapons and it is required in the state before you are permitted to purchase guns or ammunition.

If you jump through the hoops to buy a handgun, you will wait 3 days after your order to get the gun and if you want to carry the concealed firearm, you will deal with a “shall issue” state.

Maryland was so strict on gun owners that the weapons maker, Beretta, was chased out of the state!

With all the progressive proposed gun control laws of recent years, this state has complied, lock step. If you hope to buy any firearm, you will need to give the state police your fingerprints, you will not be permitted to have magazines with more than 10 rounds in them, and all “assault weapons” will be banned.

One of the hardest in the country is their concealed carry permit process. So, you’ll probably just have to hide it in your safe to appease the state after you take all the steps to buy a gun.

The fact that the liberal headquarters known as California made this list should come as no surprise. Our above standards centered on policy and representation. This state tends to have members that are proud of their conservative rules.

You experience animosity against gun owners in many areas because of this leadership. Firearms manufacturers are often required to produce versions of their weapons labeled “California Approved.” Of course, many gun owners are only running away from the state, like the Maryland impact.

There are more reasons why the sunny state of California is nothing short of a prison for gun owners: a 10-day waiting period, banning all “assault weapons” and the 10 round magazine laws.

The 5 Best States for Gun Owners

The nation’s southwestern region has been all the news lately. A state that stands out as an absolute paradise for gun owners in the modern age is nestled along the southern frontier. I’m talking about Arizona State.

Arizona is home to one of the nation’s strongest shooting neighborhoods. To behold, it’s anything. Arizona is a perfect home for gun owners, from individuals shooting recreationally to those who teach others and shoot professionally.

For the last 5 years, Guns and Ammo have called Arizona the # 1-gun state. This has a lot to do with the above stuff, but also because of the right to carry concealed or not and the laws of the Castle Doctrine that allow people to protect themselves.

Alaska, the last true American frontier, provides liberties that are no longer provided in the lower 38. Such rights extend well beyond gun ownership. In almost all instances, Alaskans are licensed to carry firearms. Without the need for any permit from the authority, they can be hidden or accessible. If a person is intoxicated, the only real law that influences that is.

Alaska also has some of the most spectacular hunting and shooting ranges. The opportunities for outdoor recreation are designed for the owner of the gun.

In the west, stunning, natural beauty and permissive gun laws seem to go hand in hand. Utah is one of the nation’s most beautiful states, and its gun laws are equally appealing. They share the right to enact regulations in areas such as Alaska and Arizona.

They work under the concept of two mechanical acts. Which means you can carry but without a round in the chamber meaning you need to chamber a round (1.) and fire that round by pulling the trigger (.2)

The law and representation are obviously pro-gun, and for gun owners, that goes a long way.

Kansas has recently shifted to authorize all accounts to carry less. They wanted to accept out of state permits, but in the legislative process, it died. Although they lack the broad support of people and do not engage in promoting support for shooting, it is easy to see why this state is a great choice for gun owners.

Wyoming is a near blueprint of what a favorable gun owner’s state might look like, even though it might not show up on your radar. If you stand and protect yourself with a weapon, the law is on your side, it is a less-carry state permit and accepts the permits of all other states. The culture of hunting and shooting is huge, and that is just another check for the good.

Wyoming is what all of us in a gun-owning state should aim for.

It is really critical that we encourage states not only to fight progressive National Gun Control, but to allow the citizens of those states to take advantage of their second amendment rights, with another powerful drive for an increase in national gun control.

It’s great to see people leave these states that tax them to death and limit their possession of weapons. It means that people are paying attention and these states will pay the price as taxes begin to fall on firearms, hunting, fishing licenses and, of course, the working American population.

Is it your time to move out of your state? You might discover yourself looking at property in a new state over the weekend after reading this post. In your hands is all the strength. Don’t let your 2nd Amendment rights be regulated by these warped governments!

How To Stockpile Six Months of Food When You Only Have...

15+ Survival Items To Keep In Your Car At All Times...