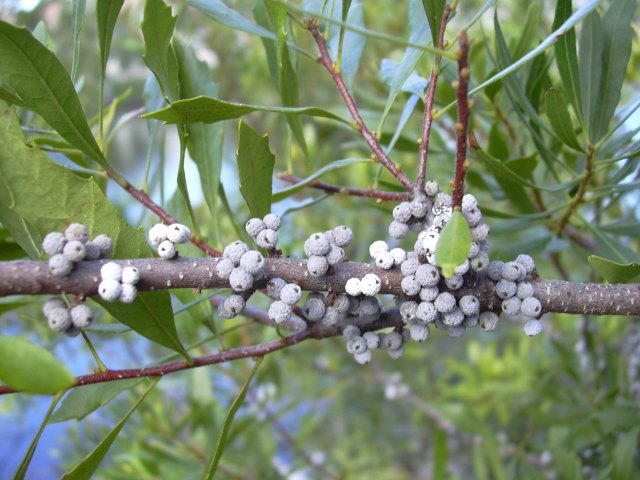 The genus Myrica contains between 35-50 species of plants that range from shrubs to small trees. The generic name was derived from the Greek word μυρικη (myrike) meaning “fragrance.” It is native to Africa, Asia, Europe, North America, and South America. The height varies from 2 to 12 ft, depending on variety and location. It prefers acid soil and has roots that fix nitrogen, allowing it to grow in poor soil. The bayberry or candleberry, has long been an important plant in the new world. It has many uses, from medicine to candle making and was an important plant to the American colonists.

One of the most interesting uses of bayberry is that of candle making. In England, they were known as the “tallow shrub” and in the new world, the bayberry was very important to early Americans. Eric Sloane, in his book Seasons of America Past, mentions the process of rendering wax from the bayberry fruit. 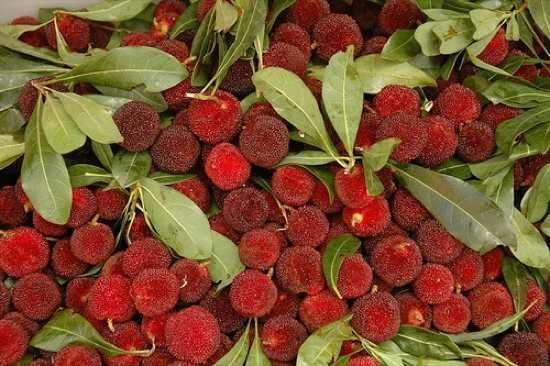 Bayberry candles were made during late autumn, when the berries were ripest. The bayberries were thrown into a pot of boiling water and their fat rose to the top and became a superior candle wax. Bayberry candles burned slowly and didn’t bend or melt during summer heat, and yielded a fine incense, particularly when the candle was snuffed. So prized were bayberry candles that the gathering of berries before autumn in America once brought a fifteen shilling fine.

Bayberry fruit produces about 1 lb of wax for every 15 lbs of berries, so if you are interested in planting them for wax production it would be a good idea to plant a number of them. The southern varieties produce the most wax but this family gathered fruit from Myrica pensylvanica (found in the north) and made some very nice candles.

Related: 15 Vegetables You Can Plant In The Fall

In addition to wax production, the bayberry has long been known as a useful medicinal plant. The Rodale Herb Book mentions that bayberry roots and bark are used as an astringent, tonic, and stimulant. The leaves (listed as poisonous in some references) are aromatic and a stimulant, it is said that a tea can be brewed and used as a gargle for sore throats, catarrh, and jaundice. The bark is used for diarrhea and dysentery, a decoction can be made and injected as an enema and can also be used as wash or poultice on sores and boils. Powdered root can be applied to wounds. It should also be noted that the foliage from one variety (Myrica gale) has traditionally been used by campers as an insect repellent. Please note: The plant has been listed as an abortifacient and therefore should not be consumed by women who are or might be pregnant.

The wax coating on baybery fruit is indigestible for most birds but the Yellow-rumped Warbler is one North American bird that can utilize the energy-rich wax. The seeds are then dispersed in the Warbler’s droppings. Myrica species are used as food plants by the larvae of some Lepidoptera species. The Brown-tail, Emperor Moth, and Winter Moth are notable examples.

Bugging Out In Winter Time

How to Dry Can Beans and Rice for a Shelf Life...