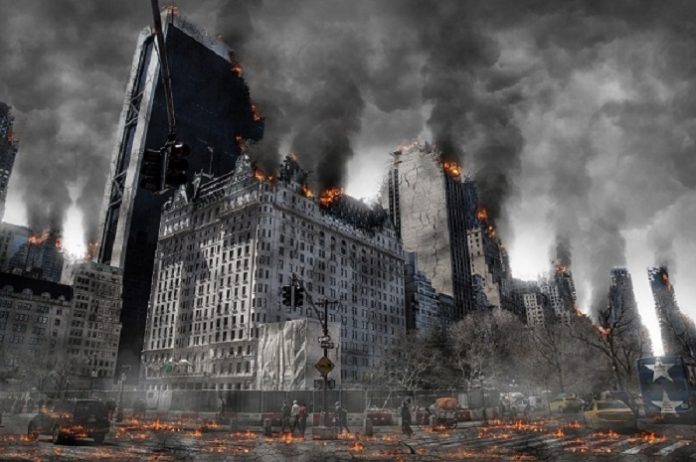 One day… the world is going to end. You would be hard pressed to find a theologist or scientist to disagree. Every beginning has an ending, every story ends, circles, door closing- all the sayings are just telling us the obvious: nothing is permanent, including this world we know and love. It is not surprising that most people agree on this, but it is surprising how many names there are for the end of the world.  These names can tell us a lot about the people that created them, and what they think may happen to cause the world’s end.

What is in a Name?

You have probably heard of a few of these names, but very few people know them all. Knowing the names and descriptions of apocalyptic events can help you understand how people could react and rationalize SHTF events. Knowledge is preparedness and knowing how others could interpret a devastating disaster can help you understand their mental state. Let’s get to the names:

Buddha will be incarnated for the final time (and called Maitreya) and the world will be destroyed by fire lasting eons. Since an eon is a billion years, that’s a heck of a long time.

Meaning “Twilight of the Gods”, Ragnarok is a singular event where monsters attack the Norse gods and the battle destroys the world.

This one is spelled out with colorful detail in the Book of Revelation, but the Cliff Notes version goes ‘Antichrist starts war in the Middle East and is defeated by Christ who reigns over a new earth’.

This one is a little vaguer and apparently open to interpretation, but a few of the instances describe:

All of these look like plausible ways to have the world end. I do appreciate that there is an interpretation giving humanity a chance at survival.

The final savior, Saoshayat, resurrects the dead and ends the world. Not bad for a Monday!

A yuga is a cycle, and kali yuga is simply the last cycle.

There are plenty of parallels here with Christianity since the Masid ad-dajjal (false Messiah) causes worldwide immorality and is then conquered by Madhi (true Messiah) who is with Isa (Jesus). They then have a judgment day followed by resurrection.

Israel is restored and the Meshiach (Messiah) appears to preside over the judgment day while raising the dead.

The Different Tones in the End

The Abrahamic religions (Christianity, Judaism, and Islam) have a sunnier outlook on the end of the world. Specifically, Christianity and Judaism both believe that the world is a journey to an endpoint, as designed by God. This endpoint is not the end, but the beginning of a better world and better existence, by God’s intention. Many of the other religions and ideologies do not see the end times with as much hope for humanity.

Why Does it Matter?

I found the various names that cultures around the world have given the end of days interesting. First of all, each one listed recognizes that there is an end. They may disagree on how or when it happens, but they all point to a finite end for the world as we know it.

The second (and perhaps more profound) observation I had looking at these is the vast amount of thought that has been put into the end of the world. Almost every religion or culture has spent a huge amount of time collating prophecies, thoughts, and beliefs on the end of the word.

Calamities are also given quite a bit of thought in religious texts and beliefs. Great floods, plagues, war, and persecution are all themes of religious history and parables. Preparedness is often seen as the actions of the divine, shown by depictions such as Noah’s Ark.

If our spirituality is tied so deeply to preparedness and our finite existence, then why are those topics brushed off in modern society? Preparedness and survival were once examined by religion thoroughly and are now avoided since the topics are uncomfortable and viewed as pessimistic. What has changed?

The many names of the end of the world show how different religions, cultures, and ideologies view the end of humanity’s timeline.  It is interesting to see the recurring themes of resurrection and judgment tied to ideas spreading across the world. A little understanding of how a disaster can be interpreted as the beginning of the end could come in handy. Keep exploring, stay prepared, and be safe.

What Do Interest Rates Tell Us About the Future Economic Crisis?

How to – Food Preservation Techniques