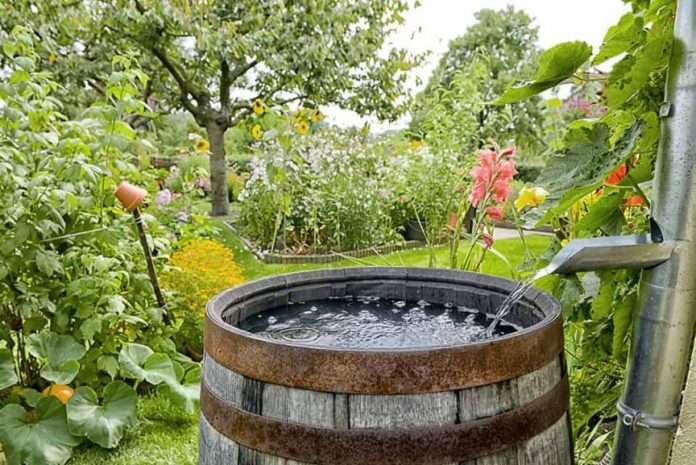 It may be difficult to understand but in many states it is highly regulated to harvest rainwater, whatever the method. It seems a little insane that anything that could actually fall on your head and soak in the ground couldn’t be captured and used as you see fit, but there are many explanations for the regulations on rainwater that so many states have put in place.

Why Is Rain Water Harvesting Regulated?

Regulations surrounding rain water collection were for the most part not put in place because the average Joe collected a little rain from his roof using a guttering system and a rain barrel. Perhaps the rules are primarily intended to protect the ecosystem from large-scale rainwater collection. This does not mean, however, that rainwater collection in some states is no longer legal for individuals.

When large amounts of rainwater are diverted from where they would flow naturally, it can cause many environmental and human problems that rely on and have rights to these natural waterways. For example, if large quantities of rainwater are accumulated that would have poured into a river allowing a farmer to water his crops and or a rancher to provide his cattle with sufficient water supplies, problems can occur. Such changes will wreak havoc especially in areas that already experience drought and water shortage problems.

The history of some US rainwater regulatory laws goes back to at least the 1800s. Although large-scale collection wasn’t really feasible then, the idea that someone could cause ill effect on someone else by collecting rainwater was still a controversial idea in some cases.

It’s important to note that the degree to which the laws would affect the average homeowner varies a lot in many places where there are laws regulating rainwater collection. Some laws state that commercial collection is unacceptable, or that you can only collect so much rain water a year, or regulate how you use rainwater collected. Just because a state has legislation governing the harvesting of rainwater doesn’t mean it’s completely unlawful. Many cities do have strict rainwater laws in effect, outside state legislation, so be sure to check those out as well.

Having said that, here are the states that have rainwater collection laws on their books with a brief explanation of how those laws are in each place.

A few years back, harvesting rain water in Colorado was simply illegal in any capacity, but thanks to new laws passed in 2016, harvesting rain water for personal use is okay in most areas. People are allowed two barrels with a capacity under 110 gallons. Collected water can be used for non-potable purposes, like watering gardens.

There was a big story about a man who was arrested for illegally harvesting rainwater in Oregon that got a lot of attention on the internet a couple of years ago, leading people to assume it was completely illegal there, but that is not the case. The man in question illegally harvested rain water but not all collection of rain water is illegal. You need a permit to collect rainwater on a wide scale in the state of Oregon, but there’s also a law that specifies that collecting rainwater from surfaces like roofs or parking lots is perfectly okay.

Oklahoma house bill 3055 established a committee to look into more efficient practices for water use and concluded that some potential rain water harvesting projects may be grant eligible.

This is another state with a ton of legislation around rainwater harvesting and the regulations are very prohibitive when it comes to harvesting a lot of rainwater. Nonetheless, there are exceptions that mean rain barrels are okay and in certain cases do not need a permit as long as there is no part within a dwelling and it does not require permits under any other regulations.

There are laws regulating what harvested rain water can be used for in Ohio, but collecting rain water here is actually encouraged and grants may be provided to set up rain water collection systems. So long as you’re not trying to consume collected rain water, you’ve got nothing to worry about in Ohio!

While there are regulations regarding commercial rain water harvesting in Arizona, there’s nothing on their books that pertains to residential collection.

The laws on the books in this state are actually to promote the harvesting of rain water, not deter people from it. There are grants available for projects, like rain water collection systems, that help make the best use of the state’s natural water resources.

Related: How To Prepare For Water Emergencies

Although rainwater collection is not completely illegal in Utah, it is still very regulated. Without registration, small systems which store under 100 gallons are allowed. If you plan to collect rainwater for personal use with a storage capacity of more than 100 gallons, you’ll need to register your system, which includes letting the government know how much water you can store. Only up to 2,500 gallons are permitted, and you may only use the water on the parcel of land where it was collected.

Though there is some regulation in Washington, it should be no problem, legally speaking, for the average citizen to collect rain water for their personal use.

Virginia does have some usage regulations to make sure collected rain water is being used safely, but overall, rain water collection is encouraged in the state of Virginia.

The Final Word on the Legalities of Rain Water Harvesting

While in many states, there is a lot of legislation around rainwater harvesting, it’s not really completely illegal anywhere on a small scale. Make sure you obey all laws in your state, county, or city and you’re going to be all right.

Is it Safe to Drink Old Stored Water?