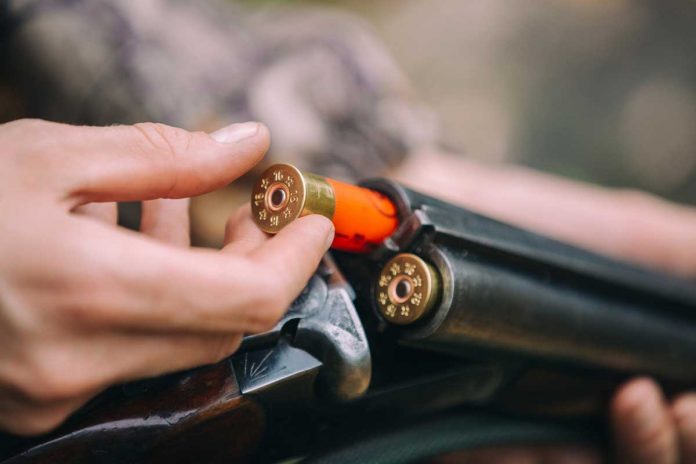 A common example of a smoothbore firearm is the modern shotgun, but there are also shotguns fitted with rifled barrels designed to shoot sabot slugs that can reach out and hit deer to 130 yards or so when combined with optics.

Although shotguns are mainly a short-range weapon, they will give you consistent performance on varmints using high-tech slug construction and wad systems, especially if shotguns are installed with dedicated varmint hunting scopes.

Since then, handloading has been part of shotgun shooting, or alternately known as homeloading, since the only way a sportsman could guarantee an ammunition supply was to make the cartridges himself. 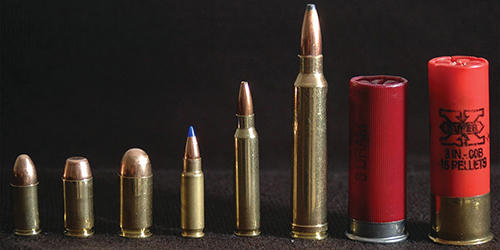 We currently have an unimaginable range of commercial shotgun ammunition on the market, but still, for odd bore sizes and chamber lengths, you will have a hard time locating the factory loads. For older, oddball gauges like 2 7/8 ” 10, 14, 32’s and some of the more exotic numbers, we mean there.

Other reasons for ammunition homeloading are enormous fun for making your own cartridges that can surpass factory standard and an obvious way to save your hard-earned cash.

In addition to those aspects of the sport where satisfaction and savings can be achieved in the manufacture of one’s own cartridges, there is one thing that preppers and survivalists in particular are all too conscious of: ammunition shortages. But, we’ll go back to that idea later.

However, regardless of what inspiration you get in the field of ammo handloading, shotshell reloading is straightforward work compared to small-caliber ammo crafting. 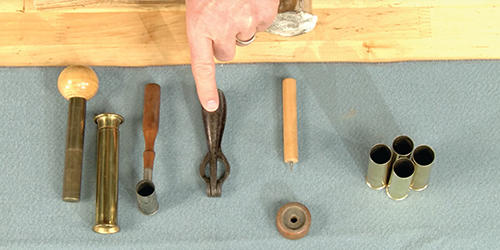 A shotgunner wishing to start homeloading may need a lot of background research and some basic hand tools such as a de-and re-capper that removes the old primer and installs a new one and reloading hand scoop shotshell powder and shot measure as well as the turnover instrument are needed to seal the end of the loaded hull.

In addition to this simple equipment, enthusiastic shooters would possibly buy a reloading press or even a progressive machine that performs reloading measures on many shells at once, eager to churn out small batches of shotshells.

The shotgun reloading supplies are simply a hull (the correct word for the plastic portion of a shotgun shell), the powder, the primer, the wad, and the projectile, much like reloading center fire rifle ammunition. At its simplest, the entire method of reloading just comes down to seven measures and can be applied in various proportions to all gauges.

You should still conduct a visual inspection to check for no defects after those seven steps are completed. This will mark the end of the process in an ordinary situation, and a fired shotgun shell is now complete and ready to fire. But supplies of food, water or energy would be crucial in any cataclysmic or post-war situation, and ammunition would be no exception.

So you can have decent quantities of reloading supplies for ammunition along with other survival needs, which will keep you firing long after the shops go dark.

However, for the long-term SHTF situation, it will not last forever for your ammunition supply of lead, shells, primers and powder.
In that context, the following chapter is another response to the question “How to Make Shotgun Shells at Home?”  The next explanation will include a general image of how it can be done in order to make your own fully functioning shotgun shells from scratch.

To make shotgun ammunition, there are four main components you must have and these are: shells, powder, primers, and shot.

Modern shotgun shells are made of plastic, but paper and brass existed before plastic. Papershells were substantially cheaper and simpler to manufacture than the other available option at the time, the all-brass case.

Paper shotgun shells have been produced for almost a hundred years, but plastic has been suppressed over time, and few manufacturers produce them today and in smaller quantities. The only problem and biggest downside of paper hulls is their ability to accumulate moisture and swell when they get wet to the point that the rounds in a shotgun can no longer chamber. Seen by many as a nostalgic curiosity of a bygone age, but from the preppers, perspective crafting paper shells are the easiest way to make a usable and deadly cartridge. 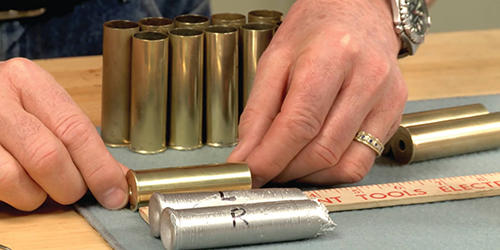 Basically, the homemade paper hulls are formed by wrapping layers of paper, glue and wax around the sizing dowel. Another phase is more troublesome after you have created stiff paper cylinders, and it concerns creating a hull foundation. The pressure from the rapid burning of the gunpowder should be strong enough to withstand it and the rim should be strong enough to remove the paper hull. You might only use old paper base shell rims, depending on your imagination, then mount them to the new paper hulls or make the cartridge head from layers of cardboard reinforced with washer or circlips and punched hole for the primer to rest in.

This paper-card construction, however, may not be sufficiently rigid, allowing the paper base to over-pressure the chamber and become dangerous. Perhaps the best way is to recycle shotgun shells from the brass case head and bond them with some seriously strong glue to a solid paper tube. Furthermore, you can build an acceptable “base wad” card and the overpowder and overshot wads. You must place a shot card over the shell when the shell is assembled and use the necessary tool to crease the ends of the paper tube to secure the shell.

A little tip, you should add the hot glue or wax that will fill the end on the shell mouth and seal it up, instead of using a cardboard disc on top of the lead shots. 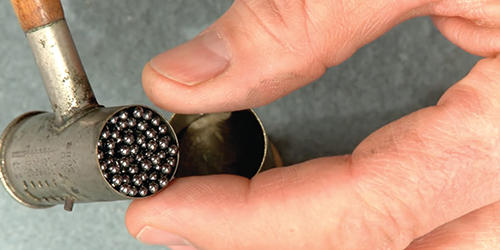 Related: 6 Best Guns to Have After an EMP

It is fairly easy to cast your own shot pellets, primarily if you have a buckshot mold and a good supply of lead. On the other hand, it has been over 200 years since it was discovered that surface tension forces every liquid into a sphere shape in zero gravity, and molten lead fell out of the “shot tower” and fell into water to form fairly perfect spheres. With the aid of kitchen sieve, inverted oil can replicate similar processes, and using a vibrating motor that shakes the molten lead stream and passes them through a vibrating nozzle allows a stream of lead to break into uniform drops. You would be able to build any shot size and variety if you have mastered this ability, and now you can charge the shell with your lead shot. 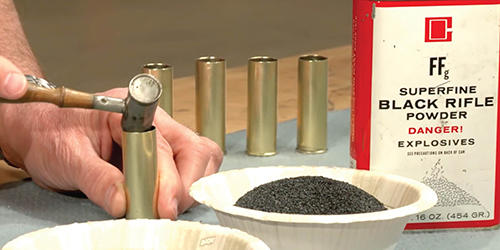 Though smokeless powder ranks high on a number of firearms propellants’ evolution scale, we’re going to get a primitive variant known as black powder. It is also simpler to produce gunpowder, also known as black powder, since the composition consists of a combination of sulfur, charcoal, and potassium nitrate (saltpetre). Just two ingredients are used in the simplest recipes: 20% charcoal and 80% potassium nitrate that you can make yourself or buy legally. 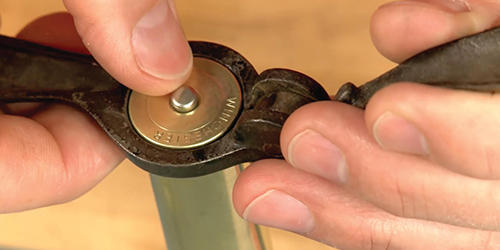 In providing reloading supplies, the DIY impact-sensitive primers are more troublesome to make and maybe the single most dangerous process. You will need more than basic knowledge of ammunition and chemistry for this project (games don’t count). Primers come in different grades, from mild to hot, like other reloading materials, so they should be suitable for the specific type of load and firearm.

While making primers on your own is feasible, it will be hard work to make your own primers. Some experienced reloaders would consider using paper snap caps for a toy gun, since they can act as shotgun primers pretty well.

As always, when we talk about DIY firearms projects, we have to warn you that some techniques mentioned in this overview can lead to injuries or even death, so you attempt them at your own risk. 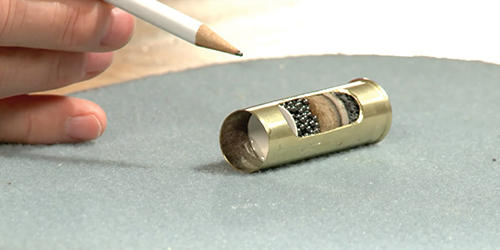 If you plan to move into the vast and fascinating world of handling shotgun shells, you can also gain a great learning experience of self-reliance by mastering the art of reloading ammunition.

On the other hand, if you plan to make your own shells by casting your own shot, or rolling your own paper hulls, or as a final stage of ammunition self-sufficiency, producing batches of homemade black powder, you will face almost zero knowledge on this online or any questionable value videos.

We often hear a question at such a discussion of these subjects, including why you would make homemade shells if you could get a box of 25 birdshot shotgun shells for about 7 dollars. Mastering ammunition reloading is a great art, and it is also an enjoyable undertaking as a proof of concept, and in the end, handloading is about more than economy.

How to Grow and Harvest Sweet Potatoes

Protecting Your Garden Against Pests And Diseases

3 Ways to Open Locked Doors During a Disaster