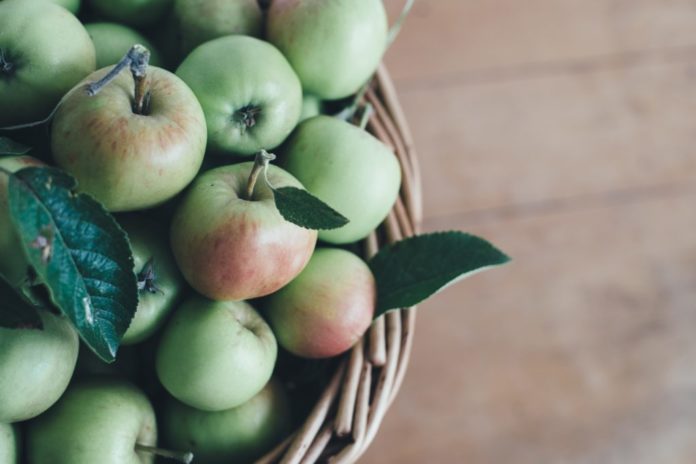 Apple cider vinegar has been used for thousands of years for its’ culinary and medicinal benefits. Making it yourself couldn’t be easier! So I’ve put together this step-by-step guide to how to make apple cider vinegar from scratch at home!

Fall is the best time of year to make apple cider vinegar. I usually make a big batch every Fall that lasts me all year (that is, if I don’t give too much of it away to friends!) You can usually get ugly or bruised apple for cheap from farmers if you don’t have your own trees. If you do, this is a great recipe to make with the cores and peels, or any ugly misshapen apples you really don’t want to peel.

Now I’m not one to jump on every diet fad that goes around. I find health claims to be interesting, but then I go back and do my own research. This is what I found:

When people talk about the health benefits of apple cider vinegar, they mean the organic, raw, unfiltered kind with the “mother”. The “mother” is the alien-like organism that grows as a result of the vinegar fermenting and contains proteins, enzymes, and friendly gut bacteria.

Since the beginning of time (5000 BC), vinegar has been used medicinally. Hippocrates (420 BC) used it to treat wounds, Cleopatra (50 BC) used it in a love potion for Anthony.

Hippocrates (the father of modern medicine) recommended vinegar to clean ulcers and sores. Oxymel is a medicine comprised of honey and vinegar and was prescribed for persistent coughs.

For a really fun – totally un-scientific post – check out my 140+ Old Wives Tales that, you guessed it, has a ton of old home remedies using apple cider vinegar.

One study on rats showed a significant reduction in systolic blood pressure when fed vinegar for 6 weeks. Another study showed a significantly lower risk for heart disease among people who consumed oil-and-vinegar dressings regularly. However, correlation does not equal causation.

Apple Cider Vinegar as an Antioxidant

Vinegar is high in polyphenols – the constituent used by plants to defend against oxidative stress. The antioxidant activity is similar to that of vitamin E (alpha-tocopherol). (source).

There have been several studies that hint that vinegar is effective at fighting cancers.

You’ll read a lot on how diabetics can drink apple cider vinegar to help level out their blood sugar. Well, it turns out, there’s some scientific proof to back that up. A scientific study saw a 20% reduction in insulin response after consuming sugar when ingesting vinegar.

Studies have also proven that the act of pickling, or soaking food in vinegar, can reduce its glycemic index by as much as 35%.

While this study was done on kombucha, the same fermentation process takes place, and apple cider vinegar is also high in polyphenols. In a study done in Feb of 2018, they discovered that the kombucha polyphenolic acid was effective in killing the bacteria that causes cholera.

Unfortunately, I couldn’t find any scientific studies regarding the GI benefits of drinking apple cider vinegar or kombucha – not because there were no benefits, but because no studies were done. However, the Proceedings of the National Academy of Sciences of the United States of America has published some exciting health benefits of all fermented foods.

If you’d like to learn more about fermentation in general, I cannot recommend Sandor Ellix Katz’s book more. It will literally teach you how to ferment anything and everything. It’s the only fermentation book you’ll ever need.

Another book I read recently that I love is “Follow Your Gut”. It’s a little scary to think about, but our microbes control a LOT more about our health and happiness than we would like to admit.

Or, if you’d like to learn how to make herbal wines, vinegar, and teas for more medicinal purposes, I highly recommend Herbal Academy’s herbal fermentation course. They have lovely videos that walk you through how to make everything if you’re more of a visual learner.

Related: How To Make Activated Charcoal

The process is deceptively simple: make a wine, leave it open to the air to continue the fermentation process. Voila, vinegar. In a little more detail, yeasts (either natural or artificially introduced) ferment the natural sugars into alcohol. If you stopped here, you’d have a lovely hard apple cider. If you leave it open to the air instead, acetic acid bacteria (Acetobacter) converts the alcohol to acetic acid. This is what gives apple cider vinegar its “bite”.

The beauty of this recipe is in its simplicity. If you’re nervous about fermentation, this is a great recipe to start with. I don’t use any artificially introduced yeast. There is yeast in the air all around us, especially on the skins of the apples. While there’s no science to back this up, I have a theory that fermenting with the same yeast that you live with, and breathe in every day, is probably more beneficial than fermenting with a packet of yeast from who knows where.

I don’t add any additional sugar – the apples are full of sugar themselves. The only tricky part is having enough water to cover the apples (which naturally want to float). Leaving the apples exposed to the air will encourage mold growth. Having them submerged, however, will prevent mold from growing, and will grow a beautiful “mother” on top. And who doesn’t love a mother? Seriously…you should call yours.

I’m planning on taking a part of the mother I grow this year and using it to make kombucha. I have no idea if it’ll work, but it’s always fun experimenting!

For the first few days, I shake or mix the batch of apples to encourage them to get waterlogged and sink. Then I forget about it for a week or two. The length of time it needs to ferment depends on the temperature in your house. If it’s warm, it can take as little as 4 weeks. If it’s cold (like mine) it can take months. But there’s really no screwing it up. If you open it early, you’ll get a more alcoholic-y vinegar. If you open it too late…well…there really is no “too late”. It’s still just vinegar.

Another variation of this is to harvest your scraps from when you’re making apple pie, or applesauce, etc. (BTW – check out my super easy applesauce recipe with canning instructions) and make vinegar using just the scraps. As long as you have enough of the flesh on the cores, and skins to add the yeast, you can do a small batch just as well. And I love anything that uses what would be thrown away.

How to Make Apple Cider Vinegar From Scratch
Ingredients
Instructions

Related: How to Make Castor Oil And It’s Power

How To Can Your Supplies

Learn How To Avoid A Flood While Camping

How To Prevent (and Treat!) Snake Bites

The Only Knots You’re Going To Actually Use In A Survival...