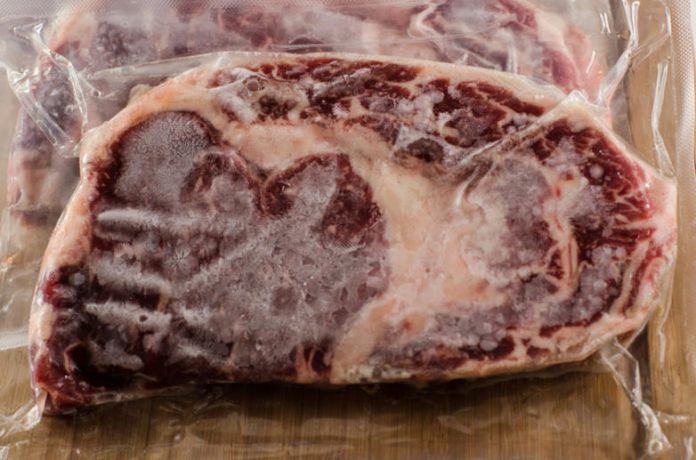 How many times did you go to the freezer to grab something later that night for dinner or the next day, only to find out what you thought was dinner, ended up in the trash? It happened to me enough times that by now I should have learned my lesson. The freezer is not a place for foods to rest eternally. So, I decided to do some research on what I did wrong; and what to look for in and out of my freezer.

Sure the freezer can be a fantastic device to store leftovers or great meat deals, cheeses, veggies, and tasty ice cream treats. But using it, comes with responsibility of learning how to properly use it.

You might think, “What’s the difference? “. Even if you may not want to eat ‘unsafe’ or ‘bad’, there is a difference. Unsafe foods will make you extremely sick. But, with a few exceptions food in a freezer rarely gets to that point.

The first example is if the electricity goes out but not always, even then. Foods will most likely spoil when power is out too long. And, later in the article, I will share the safety guidelines on how long “too long” is.

The second example will be if you put food in the freezer that had been sitting on the counter or in the refrigerator for longer than it should have been. Freezing compromised food will not bring it back to a healthy state.

Yet the USDA maintains that frozen food will stay safe so long as it is stored at or below a constant temperature of 0°F. However, the quality may suffer if it is kept in the freezer for long periods of time or the temperature is not consistently safe. In some freezers, temperatures can fluctuate, especially if the seal is no longer sealed or the door is opened a lot. If this happens, the food’s texture and quality could suffer. And, that is the gap between unsafe and bad.

So, what are the signs that food pulled out for dinner tonight might be better off thrown into the garbage? Whether it’s safe or the quality is at stake, there are visual signs to look for when making that choice. Bear in mind, I do not recommend sampling the food at some point to see whether it is healthy or not. That is not recommended!

As I mentioned earlier, foods may have gone bad but not necessarily dangerous for eating. It is because it may not be that the food has the same quality, but it does not make you sick. The following are some signs to look for if the food you bought might not be as tasty as it would have been …

Ice Crystals Inside the Package

It’s not unusual to see ice crystals in the freezer. But you’ll sometimes see them inside a package. Unfortunately, this reflected the possibility of freezer burn. This is a word used for the water molecules present in food, work their way out of it.

When that happens, eating is still healthy. You might just not find it appealing, because the texture and flavor of the food is no longer up to par. It could occur when the temperature was not consistent. Note the cheese frozen in the picture below with ice crystals directly on it. I thawed this and while it might have been digested, the consistency was not very good. It was dry and it had lost a certain flavor.

If the fresh red-colored steak that you placed in the freezer looks a bit discolored now, like grey or brown, it was probably exposed to some air. Eating it should still be OK, but not the highest in quality. Upon cooking it may turn out to be leathery or dry. In the picture below, the beef is fairly dark. I thawed it and had it cooked and it was edible. But, not almost as good as the one I cooked earlier without weeks of discoloration.

If the bright green broccoli or green beans you put in the freezer look a little bland or gray now, it is a good indication that after thawing, the taste and texture may not be as good either. The explanation is that while in the fridge, it has dried out so much. You can see the beans starting to do what I’m talking about in the following photo. The color is not as vivid, and the texture appears drier than when I first bought it. Nonetheless, they’re always worth cooking up, rather than throwing them out.

Unsure When It Went into the Freezer

We’ve all done it, probably, at least once. This is one area I’m trying very hard to get better at … writing the date on the package when I put it in the freezer. Unfortunately, the freezer isn’t meant to store things indefinitely. The consistency of any food inevitably worsens. And from there, refer the government’s Food Safety Guidelines for knowing the recommended limits for certain foods.

Related: How To Stockpile Six Months of Food When You Only Have Space for One

When It’s No Longer Safe to Consume

There comes a time when it is not a question of quality, but rather of safety, and the food should be thrown out, period. Here’s what to look for to know if your meal is no longer safe to eat …

You have a problem if you see any pooling of what looks like meat juice. That could mean the temperature of the freezer rose above freezing, either by a power outage or a freezer breakdown, and something was thawing. These may also be leaking from meats until it freezes. It is hard to say if there was any other food tainted by that juice. The safest thing to do would be throw out anything that has proof of contact with that juice.

This one is tricky because if something is wrong, you may not be able to detect until it’s thawed out. But, if the food smells at all rancid or off … especially meat or fish, throw it away. It most likely didn’t freeze to save it in time or it thawed after it was frozen for some reason.

If the item that has been defrosted feels slimy or sticky, it is a sign that the food has gone bad. Again, most likely because at some point it thawed or was already poor before going into the freezer.

These are all signs of food that you shouldn’t hesitate to throw out. Take no chance!

Shelf Life in the Freezer

As for the freezer, not all foods have been created equal. Although food can be kept in a freezer indefinitely if it is kept at or below a constant temperature of 0°F, after a while the quality begins to wane. Rather than wondering how long a certain food item is expected to last in the freezer without losing quality, here is a simple guide to follow:

Once the foods are in the deep freeze longer than the recommended times above, you run the risk of it falling under the “bad” category. Edible, but the quality isn’t all that great.

Related: 10 Foods Not to Store

After a Power Outage

We’ve probably all experienced the dreaded power outage and had to throw away a lot of food from the fridge and freezer. But, do you know you don’t just have to throw anything out? Foods that have thawed or partly thawed, can be securely frozen again, if the food hasn’t risen above 40 °F. The standard may suffer somewhat, but, at least, healthy. To know the temperature, just use a food thermometer.

You can use the following as a guide. If the food had thawed and was held above 40 °F for over 2 hours:

For food that still contains ice crystals and feels as cold as if it were in the refrigerator:

The information above is given out by the government for Food and Safety, not just a guess. But, if you are still unsure with all the information in this article, you can adopt my motto: When in doubt, throw it out.

The Many Names of the End of the World

Know the Real Expiration Date of Common Drugs in Your Cabinet

Things You Throw Away That You Should Add To Your Stockpile...