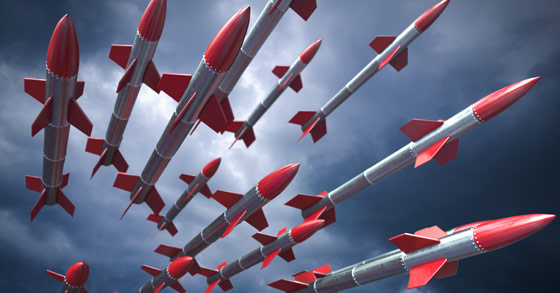 There is one big and glaring sign that the United States seeks to thrust the globe back into an arms race. John Bolton is in Moscow to discuss the United States’ intent to withdraw from the Intermediate-Range Nuclear Forces Treaty.

The end of the 31-year-old treaty signifies that potentially; world powers will return to an arms race mentality.  But there are some that believe the arms race is already upon us.  According to NPR; over the past year; the U.S.; China; and Russia have all stepped up efforts to develop a new kind of missile; a weapon that can fly faster and farther than almost anything in existence.  This kind of missile is known as a hypersonic weapon.

These types of weapons would have the ability to travel at five times the speed of sound or more. They could strike at a target while evading missile defenses and hit almost anywhere without any warning deep inside enemy territory.

In March; Russian President Vladimir Putin announced his nation had successfully tested a hypersonic weapon known as the Kinzhal; the Russian word for “dagger.” The video below shows the Russian “Dagger” which is one of the hypersonic weapons currently being developed.

But the Chinese aren’t lagging behind in this new arms race either. In August; China said it had conducted the first successful tests of a hypersonic prototype called Starry Sky 2. It flew for more than five minutes and reached speeds above 4;000 mph; according to state media.

Physicist James Acton at the Carnegie Endowment for International Peace who has studied hypersonic weaponry. Acton says these developments are just the beginning.  “Over the next few years we’re likely to see a lot of testing;” Acton says.

Because of these recent advancements in hypersonic weaponry; Mike Griffin; the Pentagon’s undersecretary of defense for research and engineering; said he was worried the U.S. was losing its edge in hypersonics. “We did the groundbreaking research. They’ve chosen to weaponize it. We need to respond;” Griffin said at a forum on missile defense on Capitol Hill; according to NPR.

Acton says advanced materials and supercomputers are helping hypersonic development. “We are seeing Russia; the United States; and China all conducting hypersonic tests;” he says. “I would be surprised if there were not hypersonic weapons deployed within the next decade.”

The Honey Antibiotic That Should Always Be In Your Stockpile

From the Survivalist’s Field Guide – How to Charge Your Phone...

Prepping is Not For Everyone