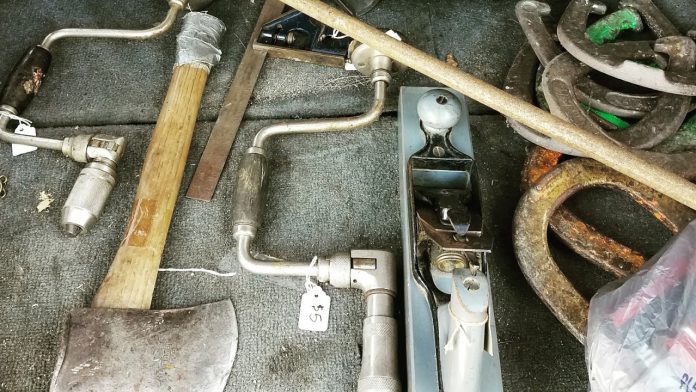 I know this is not the first time I’ve written about flea markets and garage sales. Probably won’t be the last time either. Do you want to know the secret behind a successful flea market shopping spree? – never expecting to find anything of use. It really works, and I’ve tested it a couple of times.

See, when you go with a shopping list in hand, chances are you find zilch or end up buying crap you really didn’t need. That’s the beauty of browsing without purchasing I guess – expecting nothing, but, boy, when you do finally find that one item you were looking for, it’s as if the skies themselves opened up to you (with trumpeting angels and everything).

Anyway, as I’ve said it countless times, the flea market is treasure troves, especially to us preppers who are always on the lookout for more stuff to enhance our survival kits or B.O.Bs. And since “old is the new, well, new,” in today’s article I’m going to talk about some neat vintage items I picked off from my last trip to the flea market.

Why vintage? Because they’re cool and, of course, most of them have no need for electricity or whatever to work, which makes them invaluable in just about SHTF situation. If you’re interested in visiting this flea market, I was talking about, come to Bozeman, Montana, and check at the corner of S. Wilson and W. Main Street. If the weather holds out, the chances are that those wonderful guys will probably stay for a couple of days more.

Now, before I bore you to death, here’s my list of retro\vintage things I bought from the flea market. No, it’s some kind of STD or ad on someone of those websites with a lot of onomatopoeia, it’s actually a very useful wood-working tool. See, if you’re into carpentry and would like, say, to make the surface of a log smoother, you need this bad boy to scoop out the excess wood.

It kinda resembles a pickaxe or a garden hoe, except for the top part which is shaped like a cone or scoop instead of being pointy. I guess you can buy one from any hardware store but, in my experience, special tools like the adze are very hard to come by – a friend of mine had one custom-made ‘cause he was unable to find one for sale. Picked up mine for $10. ‘Twas a little out of shape; the scoop needed to be straightened, but there’s nothing a little hammering can’t solve. How about them apples? Everybody loves ‘em (except for docs, of course, who tend to cower in the corner like Nosferatu or something) and for darn good reasons. Still, the most annoying thing about them is having to peel and remove the core. Well, for me, that’s kind of a thing of the past, since I’ve managed to get one of those apple slicing and coring gadget. Nothing too fancy about it: just a squid-like metal ring with several tiny jagged strings in the middle.

Handy to have around the house, especially if you like (or are forced) to prepare stuff like baby purees, salads or are plain lazy. I got mine for two bucks, and I can wholeheartedly say that it was money well spent. Dunno why it’s considered a vintage item though. Sure, compared to a food processor, nearly every kitchen tool can be considered obsolete. However, sometimes, simple is better. Doctor, it’s safe to come out now! Finished talking about apples.

Of course, brother Eddie is going to write about another nifty coffee gadget he bought from the yard sale. This time, it’s an awesome and, why not, a peculiar contraption called the French press. No, it’s not used to print newspapers or counterfeit money, but for making coffee. I really can’t figure out why people stick to coffeemakers instead of using one of these bad boys. Anyways, the French press is basically a glass jar with a little flat piece in the middle that can be moved with a lever.

All you have to do in order to make a great cup of coffee is to add water, coffee, and wait a couple of minutes. Then you simply press the lever all the way down – coffee ground remains on the bottom, and you’re free to serve. The one I got from the flea market is made out of the tin, which means I can also use it to boil water. If I’m not mistaken, there’s even a tea version of the French press – works the same, but the strainer is thinner. Time and time again, I’ve been trying to convince myself to go digital. Sure, nothing beats the 35mm for a mirrorless or 8mm for one of those vintage cam records, but the thing is, they’re very hard to come by these days. In fact, the last 8mm dozen I bought came from an online auction on eBay.

If you really don’t want to spend hundreds of bucks on something you may or may not use (if you’re not into photography, selfies or whatever, you should at least have a digital with you for insurance purposes), you should definitely take a closer look around the flea market.

My wife managed to get ahead of me this time, and, oh boy, the stunt she pulled! We managed to get ourselves a brand-new Canon EOS (thing was literally inside its original packaging). For this jewel, we forked over 25 bucks. Now that’s what I call a great bargain! Before there were self-heating chairs and portable heaters, there were the so-called electric bum warmer. Basically, it’s a blanket with heating elements placed on some kind of support. These things sold like hot cakes during the early 50s and were very much appreciated by the ladies, especially during those not-so-pleasant-days of the months.

If you happen to come across one of these babies during one of your trips, do yourself a world of good and buy one. I purchased two of them for my hunting cabin – beats cranking up the heat and it comes really handy when it’s cold outside, and I have to do some tinkering in the garage. Also called the jab or alligator saw, this nifty little tool is great for jobs that call for precision cutting. Yes, I know that you can probably find one in every hardware store, but do keep in mind that the manufacturing tech has changed quite a bit.

In other words, you might end up doing more stuff with the one you found in your grandpa’s toolbox than a brand-new one. You should also know that the first batch of alligators ever produced had their blades made from stainless steel, and the handles from sterling oak – not that’s what I call solid, all-American craftsmanship! And because we like to enjoy the little things in life like splitting a fire log evenly, here’s on an item that shouldn’t be missing from your tool shed – the goosewing ax. For those of you who are unfamiliar with the terms, goosewings resemble those broad axes Vikings used during their raiding parties.

The ‘civilian’ version, if we can call it that, has a smaller head, shorter handle, but preserves the same curvature. As for the answer to our Friday night trivia: “what the Hell can I do with the midget version of the executioner’s blade?” (dramatic pause). Busting knots. Plain and simple. No matter how much strength you put in that swing, the blasted thing will not keel.

That’s where the goosewing comes into play – the blade chops and, at the same time, splits the wood. Careful though, because this ax version is heavier than most. And yes, you can find goosewings at any flea market. Just give it a good sharpening after you bring it home (handle might need some polishing too). No, it’s nothing like Occam’s blade or Murphy’s rules which should, by the way, be taught in prepping school, if there ever will be such a thing. Stanley’ Zig-zag is a foldable measuring device that can fit inside any pocket. Shorter than a tape measure, but far sturdier, it’s the kind of tool carried around by engineers and constructors ever since the late 19th century.

The most common Stanleys had 15 folding points and a total length of 35 inches. Now, this is the kind of tool you would want in your shed, especially if you’re into carpeting or metalworking. I found one at a flea market in Toronto last year. Think I must have paid 2 bucks or something. Ka-Ching! Sometimes it’s hard to guess whether the thing you’re working on is straight or will turn out crooked. This is why it’s always a great idea to have a plumb bob nearby – a nifty and very basic tool that lets you determine the true vertical faster than you can say “preparedness.” Of course, if have the right materials, you can build one at home. Still, if you come across a flea marketeer selling one of these thingies, you should definitely go in for the kill. I very much like wood-working, but I always had trouble gluing pieces together, especially when I have to use fast-setting epoxy. Vise clamps are great for this kind of job and, if you’re lucky, you can probably walk off with a whole bunch of them.

That about wraps it for my list of 10 retro items bought from flea markets. Before going away, I should give you a bit of a heads up – don’t expect everything you buy to be in tip-top shape. Sure, there’s always a chance you can end up with a mint-edition item, but those are very rare instances.

In fact, in most cases, the items have some kind of defect – missing screws, paint scratched, faulty wiring, extensive warping, and the list goes on. My advice to you is this: don’t blow a gasket and don’t throw the object in the trash. Yes, I know it’s very frustrating to end up buying a big nothing, but do keep in mind that with a bit of love, care, tenderness, and the right Philips screwdriver, everything can be fixed.

So, what are your thoughts on this list? Think something’s missing from it? Then hit the comment section and let me know. I would very much also like to hear some of you more “unusual” experiences from trips to the flea market. Who knows? Maybe some of you managed to find a missing Rembrandt or perhaps other treasures from the past.

100+ Items to Barter in a Post-Collapse World

What Are Your Chance of Surviving an Urban SHTF

How To: Survival Knots [With Videos]