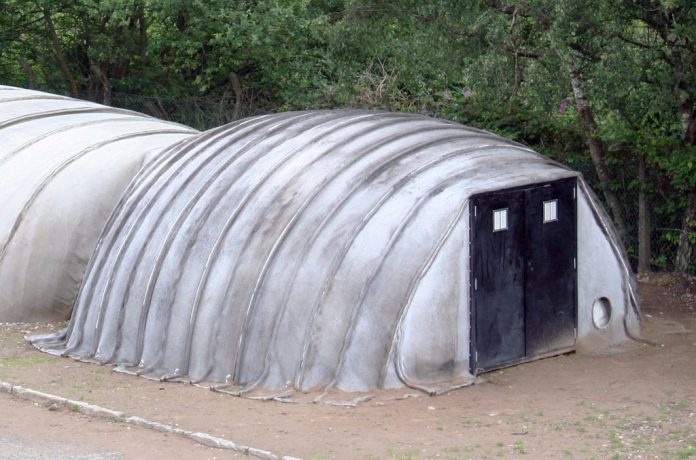 Yes, the magic of this shelter is that it turns to concrete within 24 hours after it is sprayed with water. As with the title:

Tents That Turn Into Bunkers!

The shelter arrives folded in a wooden box and an electric fan is activated once positioned which inflates the inner part of the plastic until it is able to support itself. Water is then sprayed on, and it is hard as a rock 24 hours later.

The Concrete Canvas Shelter can be deployed in less than 1 hour by 2 people, and is ready to use after one day, making it the easiest and fastest hard construction you can build. A Concrete Canvas Shelter’s hard shell and lockable doors provide a level of safety that is not possible with soft skinned structures, protecting stores, equipment and personnel.

The shelters provide a safer living space, as unlike tents they are lockable, fireproof, cool in the sun and will last for decades, according to the inventors.

Would it be Useful for Preppers and Survivalists?

Well it seems that the Concrete Canvas Shelter would make a decent bunker! 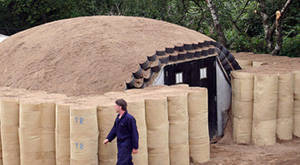 First, this shelter has been designed to withstand a very high distributed compression load allowing for sandbag, earth or snow berming. It gives the shelter excellent thermal properties and can provide shrapnel, blasts and weapons protection.

Second, this can be quickly camouflaged either by burying it in the ground, or by painting it with camo.

Third: The Concrete Canvas Shelters are built as part of a modular system according to the inventors. Thus, units can be docked together to create arrays of structures to suit operational requirements. This means you have this choice if you want to expand the bunker to shelter another family who wants to contribute financially.

Fourth: It doesn’t mention in the video, but this shelter should make a good tornado shelter because of its form. And it’s also fireproof.

Related: How Much Does a Nuclear Bunker Cost?

The only problem is that the firm is based in the United Kingdom and the company that distributes the shelter in the United States (Miliken) is too small to offer good prices. Depending on its size and other factors the shelter costs between $20,000 and $30,000 without tax.

What do you think of these tents, that become bunkers? And what would a decent price be for that?

What Kind Of Guns Are Best Stored To Leave As An...

How To Escape Zip Ties